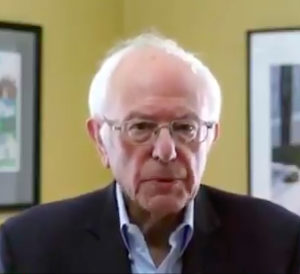 The news that two-time New Hampshire POTUS primary winner Sen. Bernie Sanders is suspending his campaign sparked a shower of praise from some Granite State Democrats, while others responded to his departure with a telling silence.

“If I believed we had a feasible path to the nomination, I would certainly continue the campaign. But it’s just not there,” Sanders told supporters on Wednesday. “I congratulate Joe Biden, a very decent man, who I will work with to move our progressive ideas forward.”

Executive Councilor Andru Volinsky promptly took to Twitter to express his admiration for the Vermont socialist.

“Thank you, Bernie Sanders, for all you’ve done to bring ideals like Medicare for All, $15 minimum wage, tuition-free public college, and a Green New Deal into the political mainstream. I’m grateful to be the first candidate for Governor to earn his [sic] endorsement this year, and I look forward to running a grassroots campaign that meaningfully engages young, working, and middle-class voters.”

“Thank you for showing that you don’t need to rely on billionaires and corporate interests to fund campaigns,” Volinsky tweeted.

Interestingly, there was no mention whatsoever of Sanders’ decision in the Twitter feed of Volinsky’s Democratic primary opponent State Sen. Dan Feltes as of late Wednesday afternoon. The same for the campaign accounts of Democratic U.S. Senators Maggie Hassan and Jeanne Shaheen – both of whom evaded making any endorsement in the First in the Nation primary.

Hassan eventually threw her support to Biden, while Shaheen has still declined to endorse. (Her husband Bill has been a major Biden booster, and Senator Shaheen’s support for the former V.P. is one of New Hampshire’s worst-kept secrets.)

Other New Hampshire Biden supporters have been more open about their feelings.

“Proud to have supported Joe Biden since the day he announced a year ago. The many doubters have been proven wrong so, yeah, I feel a bit vindicated,” said Democratic strategist Terry Shumaker. “Been a long time since being part of his first run 33 years ago!”

On the other hand, former N.H. Democratic Party chair Kathy Sullivan, no fan of Sanders’ campaign, told NHJournal, “I am sad for his supporters.” Then she added, “but given the current circumstances with the coronavirus, his path has closed. Also, he knows Trump has to be defeated. The sheer incompetence this president has shown the past few weeks makes it imperative that we all unite to defeat him.”

Despite coming from opposite ends of the Granite State Democratic coalition, Sullivan’s sentiment is similar to that of outspoken progressive and one-time gubernatorial candidate Arnie Arnesen:

“I’m voting for Joe, of course. Our democracy is on the line,” she told NHJournal. “I am horrified by the cruelty and vindictiveness of Trump, but more appalled by ‘his’ party that has lost all connection to truth, science, the rule of law, the value of the franchise, and the idea that the health and safety of their citizens matter.

“I am voting for Joe because it is a vote for me and for my children’s future. I will fight for change like I have never fought before,” Arnesen said.

Not all Sanders supporters are quite as ready to jump on the Biden bandwagon. New Hampshire progressive activist Herbert Thomason, Jr. — known as ‘Junior’ in Democratic circles — tells NHJournal many of his activist friends lost interest in the race weeks ago.

“Honestly, the race has been over since Super Tuesday. I really don’t have any interest in the Biden campaign. Joe Biden doesn’t have a real agenda.”

“This was never about Bernie personally, but his platform,” Bosen said. “Bernie accurately noted the majority of voters in exit polling favored his positions over Biden’s. Voters were merely bullied by the DNC and their MSM mouthpieces into being afraid to vote for someone who calls himself a ‘Democratic Socialist.’”

Bosen noted that Sanders is suspending his campaign, but he’s still trying to win delegates in a bid to influence the party platform. New Hampshire Republicans have picked up on the same thing.

“He’s suspended the campaign, and he’s pursuing delegates to promote his socialist agenda and he’s going to shove it down Biden’s throat,” Trump’s N.H. campaign co-chair Rep. Fred Doucette told NHJournal “He’s going to be at the table making it clear he wants socialism to be part of the Democrats’ message, and that’s not a message the country agrees with.”

Many of the progressives NHJournal talked to focused less on Biden and more on his running mate. “A lot of people are waiting to see who he picks as V.P.,” Junior said. “There’s a lot of chatter about Kamala Harris, and many folks don’t really like her too much.”

“Influencing the platform means nothing unless there is a progressive vice president,” Bosen said. “Because of Biden’s decline, that person will be the de facto president.”

“That choice could keep me in the party and working for victory,” Bosen said.