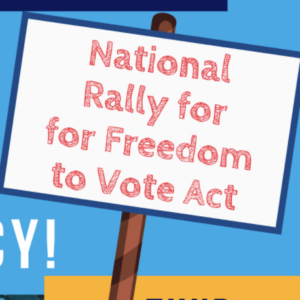 It had the support of all four members of the New Hamshire congressional delegation and 50 members of the U.S. Senate, but a Democratic bill to federalize state and local elections was blocked by Senate Republicans Wednesday afternoon.

It’s the latest attempt by the delegation to pass legislation limiting the power of state officials like Secretary of State Bill Gardner (D) to oversee Granite State elections are conducted — including the state’s signature First In The Nation primary.

New Hampshire Democrats have been among the most outspoken advocates for the law.

“Today, I’m voting yes on the #FreedomToVoteAct,” Sen. Maggie Hassan tweeted Wednesday. “Free and fair elections are the bedrock of our democracy, and this bill would help stop billionaires from buying our elections, crack down on dark money, and make sure every American can have their voice heard.”

Reps. Annie Kuster and Chris Pappas both signed a letter urging the Senate to pass the legislation.
“The Freedom to Vote Act can fortify our democracy and bring Americans of all political stripes back into the town square,” the letter reads.

Critics note the legislation would prevent voters in the town square from making the rules for their own elections.

“Our position hasn’t changed,” Deputy Secretary of State David M. Scanlan told NHJournal. “This bill would be a federal takeover of New Hampshire’s elections.” He called the bill’s defeat in the Senate “good news.”

“The bill is hundreds of pages long, and it covers aspects ranging from requiring states to mail every voter an application for an absentee ballot, to drop off boxes for ballots, and at locations other than with the city and town clerks. That creates logistical problems of getting ballots to where they belong, and doing so securely,” Scanlon said.

The defeated bill would also:

— Force New Hampshire to send postage-paid mail-in ballots to every voter who requests them, rather than having Election Day voting supplemented by absentee ballots;

— Require New Hampshire to have at least 13 days of early voting, including weekends, and to count ballots that come in late;

— Ban voter ID requirements by mandating allowing voters without ID to cast ballots based on a signed statement alone;

— Give millions of public dollars to political candidates to use on campaign staff, TV ads, attack mailers, etc.

And of special concern in New Hampshire, the law would cover “a primary election held for the expression of a preference for the nomination of persons for election to the office of president.” In other words, the First In The Nation primary.

That’s something not even the more expansive For The People Act attempted. According to Garder, this fundamentally changes the primary, which is currently a state election involving state officials, aka representatives to the Electoral College.

“The point is they did this now, and they didn’t do it in the first bill,” Gardner said. “You had a 1,500-page bill and now you have a 600-page bill, but they are still fundamentally changing how we conduct and participate in our election.”

“This is a terrible way to do this,” Gardner said.

The overwhelming support for the bill among New Hampshire’s elected Democrats is raising questions yet again about their support for the FITN primary. Polls show most Granite State Democrats don’t support the state’s law protecting the primary. And the state Democratic Party recently handed New Hampshire’s slot on a key DNC committee to a Washington, D.C. resident with few ties to the state.

The primary isn’t just an important part of the national political process, it’s a key part of the Granite State’s economy, bringing in millions of dollars of business into the state. The fact that all four Democrats in the delegation are willing to back bills that endanger it is a telling political development in the Granite State.