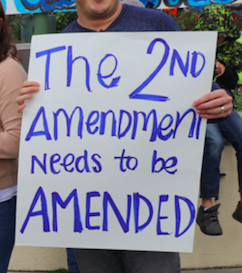 NH Dem: Repealing Second Amendment “A Good Discussion To Have”

Is it time to repeal the Second Amendment?  Retired Supreme Court Justice John Paul Stevens wrote an op-ed for the New York Times urging just that, and at least one New Hampshire Democrat thinks it’s worth considering.

Rep. Katherine Rogers (D-Merrimack) has long been active in the New Hampshire state house pushing gun control measures (she prefers the phrase “gun violence prevention”) and in an interview with the NH Journal, she said “it’s an interesting discussion that we should have.”

“I think that the United States Constitution is a living, breathing document and it’s always time to revisit and to look at our Constitution,” Rep. Rogers said.

Jonathan Weinberg, one of the student leaders of the #MarchForOurLives rallies in New Hampshire singled out Rep. Rogers, along with state senator Martha Hennessey (D-Hanover), for supporting students’ efforts on gun control. Last week, students from the group presented a petition signed by several hundred area students to Gov. Sununu and the state senate urging the legislature to change state law and allow local school districts to declare their schools gun-free zones. The measure failed 14-9.

Meanwhile, the New Hampshire GOP is following the lead of President Trump, seizing on the Stevens op-ed to urge gun-rights supporters to get involved in the 2018 elections.  Just hours after President Trump tweeted about Justice Stevens’ call for repeal (“NO WAY! We need more Republicans in 2018 ad must ALWAYS hold the Supreme Court!”) the NHGOP posted “StopTheGunGrab.com,” featuring a video by party chairwoman Jeanie Forrester. In the video, she warns New Hampshire residents that “The Left is openly advocating the repeal of the Second Amendment…It’s unconscionable.” (See full video below)

For their part, Democrats don’t seem worried. Democratic Party Chair Ray Buckley responded to the video by mocking the GOP.

This is not a parody from the @nhdems staff. This is real. Let that sink in and the donate to the https://t.co/9XneCHlKtJ to #VoteThemOut2018. They are stunningly out of touch with reality.   #nhpolitics https://t.co/w84trzZpzb

Is welcoming a conversation about repealing the Second Amendment and mocking gun-owners concerns a sign that the New Hampshire Democratic Party is moving left on the gun issue, along with their national party?  Do they believe that gun control could be a winning issue in the Granite State?

“Oh, please,” says Republican Bill O’Brien, former Speaker of the NH House, “throw us in that briar patch!” O’Brien believes that even among Democratic voters, support for gun rights in New Hampshire is strong.

“We’re not afraid of guns here,” O’Brien to the NHJournal. “I don’t know who [the Democrats] are talking to with these messages—maybe the academic crowd, college students? Let them run on gun control and see how most voters react.”