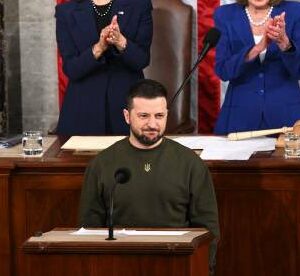 Ukrainian President Volodymyr Zelenskyy told a joint meeting of Congress Wednesday night his country is “alive and kicking” in the face of Russia’s military onslaught. It was a message New Hampshire’s federal delegation found inspiring, as they continue to support U.S. financial aid for the embattled nation.

“Your money is not charity,” Zelenskyy told members of the U.S. House and Senate. “It’s an investment in the global security and democracy, that we handle in the most responsible way.”  And, he added, it’s money being spent to defeat the expansionist designs of Russian president Vladimir Putin.

“Iranian deadly drones, sent Russia hundreds, began a threat to our critical infrastructure, that is how one terrorist has found the other. It is just a matter of time when they will strike against your other allies, if we do not stop them now – we must do it,” Zelensky said.

“Against all odds, and doom and gloom scenarios, Ukraine didn’t fall. Ukraine is alive and kicking,” Zelensky added. “Russian tyranny has lost control over us.”

The Granite State’s all-Democrat federal delegation liked what they heard.

“Zelenskyy is a hero,” tweeted Sen. Jeanne Shaheen. “He is courageously leading his nation as Ukraine fights for its freedom and for democracies worldwide. His address to Congress – and the American public – was important to remind us why we must stand by our partners in Ukraine.”

“Tonight, President Zelenskyy delivered a message of patriotism, purpose, & hope,” Rep. Annie Kuster said, also via Twitter. “Russia’s brutal invasion of Ukraine has shown the importance of defending democracy across the globe. I’m proud to stand with the people of Ukraine as they fight to defend their country & freedom.”

And Rep. Chris Pappas used a press release to remind reporters that he — and 397 other members of Congress — have been sanctioned by Russia in response to sanctions imposed on Putin’s regime by the U.S. in response to the Ukraine invasion. Pappas also reiterated his support for U.S. funding for Ukraine’s war effort.

“In support of European counties battling Hitler’s aggression in 1941, President Roosevelt called for America to send resources and aid ‘to the battle lines of democracy.’ Those lines have been drawn again today, and I will continue to support efforts to aid in Ukraine’s fight against Vladimir Putin’s illegal and immoral invasion and to ensure that we once again help make the world safe for democracy,” Pappas said.

In 2022, the U.S. directed nearly $50 billion in assistance to Ukraine, which includes humanitarian, financial, and military support, according to the Kiel Institute for the World Economy.

The omnibus budget bill, expected to pass Congress by Friday, includes an additional $44.9 billion in emergency assistance to Ukraine and NATO allies, more than originally requested by the Biden administration. Zelenskyy was grateful, but he said Ukraine needed even more.

“We have artillery, yes. Thank you. We have it. Is it enough? Honestly, not really,” Zelenskyy said Wednesday night.

Zelenskyy added that attempting to push a peace deal onto Russia and Ukraine at this time would be a mistake. “It would be naïve to wait for steps toward peace from Russia, which enjoys being a terrorist state. Russians are still poisoned by the Kremlin.”

“America’s support at this critical stage shows that democracy is always worth fighting for,” Sen. Maggie Hassan said Wednesday night.