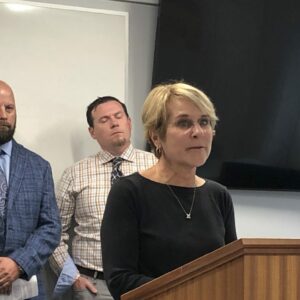 Ralph Noveletsky had had enough from unions. It was the 1970s and the founder and owner of Novel Iron Works, a structural steel fabricator, was tired of seeing his business regularly shut down by union bosses, his daughter, Hollie Noveletsky said.

“My dad was in Malden (Massachusetts) and the unions would shut him down every year,” she said. “He finally said to them, ‘You shut me down one more time and I will move to New Hampshire.”

Noveletsky made her comments to NHJournal after joining a group of local business owners and community leaders to oppose the “PRO Act” — a federal law that would override states’ right-to-work laws. The bill, backed by both Sens. Jeanne Shaheen and Maggie Hassan, would force employers to turn over employees’ private information—including cellphone numbers, email addresses, and work schedules—to union organizers. It would also remove the protections of the secret ballot in votes to unionize.

While New Hampshire has yet to pass right-to-work legislation, Noveletsky says her father’s story, and the story of her businesses, is a cautionary tale regarding the need to keep a balance between management and labor.

Ralph Noveletsky was a World War II veteran and a member of the famed Merrill’s Marauders, the U.S. Army outfit that worked dangerous missions behind enemy lines in the China-Burma-India theater. It took him a long time to recover from the war and get his life on track.

“He was one of the few who came home,” Hollie said.

Her grandfather ran a junkyard, and when Ralph Noveletsky was in his mid-30s in 1956, he started his structural steel business, making rails and stairs in the back of the junkyard. The business worked, and he built it out to buy the raw materials, and manufacture the structures for schools, hospitals, malls, apartment buildings, and more, she said.

But as he grew, he kept running into problems with the unions in union-dominated Massachusetts. When he finally warned them about a potential move to New Hampshire, he wasn’t making an idle threat.

The unions did not heed that warning, and after one last work stoppage, Ralph Noveletsky started buying land in the Granite State. He soon relocated the business to Greenland, N.H.  Noveletsky said he wasn’t escaping his employees. He rented a trunk and helped many of them and their families move north.

He was escaping the unions that were holding his business, and his employees, back, said Hollie Noveletsky, now the CEO of Novel Iron Works.

“A lot of our employees have been here for 25 to 30 years. We have brothers, fathers and sons, we even had a grandfather, son, and grandson all working for us at the same time. It’s family. We know them, and we know them personally. Bringing a union into that relationship really damages it,” she said.

The business stayed in the family, and Hollie’s son, Josh Rosenthal Noveletsky is the president.

Now, however, she’s worried about unions getting forced on her family business thanks to the PRO Act.

“The PRO Act completely upends the carefully crafted 70-year balance between labor and management,” said David Juvet, the interim president of the New Hampshire Business and Industry Association. “This is the last thing that businesses need as they struggle to adapt and survive to the challenges created by the COVID-19 pandemic.”

Under the PRO Act, companies like Novel would be forced to give union representatives access to personal employee information, according to Josh Reap, President and CEO of the Associated Builders and Contractors of NH/VT.

“What’s worse, employers and employees would be precluded from opting out of this requirement and would not have a say in which information was provided, leaving employees without a voice on such a critical issue,” Reap said.

Noveletsky said that under the PRO Act her business would not be able to present an alternative to the union pitch. Reap, Juvet, and Noveletsky all took part in a panel on Tuesday in Concord to discuss the PRO Act and its negative impact on businesses.

Noveletsky not only has to deal with that Canadian pressure, but now she has to contend with the new realities from the COVID-19 pandemic. She’s lost a lot of experienced workers who decided to retire in the last year, and she’s been unable to find trained and skilled laborers to come on board. The company’s gone from about 100 employees before COVID, to about 80 now.

“The PRO Act is going to add more pain and suffering on top of it all,” she said.

Noveletsky called Hassan’s office to voice her concerns about the PRO Act. While Hassan’s staff was attentive and listened to her, she hasn’t heard back from the senator.

“They said they’ve been hearing from a lot of other business owners with similar concerns,” she said.