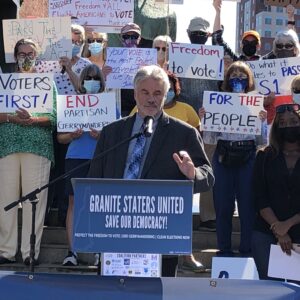 In a fiery speech at a rally for the “We The People” Act, New Hampshire AFL-CIO President Glenn Brackett declared progressive legislation like H.R. 1 must be passed, though he conceded it overrides freedom and individual choice.

“There are things that have to be done in this country that supersede individual rights,” Brackett told the Manchester crowd.

The national AFL-CIO faces criticism for supporting President Joe Biden’s vaccine mandate, which he is imposing on workers — including unionized workers — without going through the collective bargaining process. Instead, Biden’s mandates on federal workers, federal contractors and private-sector workers at companies with 100 employees or more, would override any existing CBAs (collective bargaining agreements).

Polls show the mandate is getting mixed reviews from Democratic constituents. According to a new CNN poll, 40 percent of Black voters — Biden’s strongest constituency — oppose the mandate, as do 54 percent of voters under 34 years old.

More problematic, a majority of independents — 51 percent– oppose it as well.

Brackett has refused to respond to multiple requests for comment on Biden’s vaccine mandates, but he made his views clear on Monday. He supports mandates, even at the expense of individual rights.

“I’ve got prepared remarks here this morning, but a couple of things have occurred to me, just from the fact is I watch TV– too much sometimes,” Brackett said. “And I see what is happening in this country. Everybody has their own point of view. Everybody believes that freedom is an individual choice.

He also advocated the passage of the PRO Act, which would take away the right of states to pass right-to-work laws and end a worker’s right to have a secret ballot when voting on whether to unionize their workplace.

And Brackett supported H.R. 1, which would supersede the right of local voters to pass their own election laws.

“In New Hampshire, we appreciate democracy,” Brackett said. “We approve town budgets by democratic vote. Every spring we elect the third largest English-speaking legislature in the world. So every neighborhood can have their voice heard in the state capital.”

Under H.R.1, state elected legislators would no longer be able to pass state election laws through the democratic process. Laws regarding mail-in ballots, early ballots, residency requirements, and voter ID would be set in Washington, D.C.

In order to get all of these measures passed, Brackett said, the filibuster, which he called a “ridiculous” and “absurd, archaic Senate rule,” would have to be abandoned.

Interestingly, just an hour or two later, Gov. Chris Sununu released yet another statement reiterating his opposition to Biden’s order.

“Instead of working collaboratively with Governors across America to increase the vaccination rate, President Biden skips our weekly calls and issues overreaching mandates from Washington,” Sununu said. “I am working directly with my fellow governors to see how best we can push back against this federal overreach. I am as pro-vaccine as it gets, but I do not support this mandate from Washington as it is not the answer.”

Sununu’s two public statements on the Biden mandates are more than the entire New Hampshire congressional delegation has made combined.