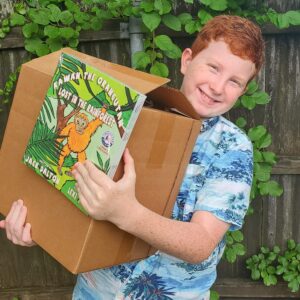 Nashua’s Jack Dalton, the 11-year-old Kid Conservationist who works to save orangutans, is now one of the 25 International Young Eco Heroes being honored by Action For Nature.

“It was very exciting to get the mention. It’s really a great way to spread the word for orangutans,” Jack said.

Action For Nature is a San Francisco-based advocacy organization that gives out the award to highlight children aged 8 to 16 who work to solve serious environmental problems.

“Kids like Jack have shown that the next generation of leaders is here, and they are refusing to wait to solve the world’s most pressing environmental challenges,” said Beryl Kay, president of Action For Nature.

Jack gained fame for his work educating people about the dangers orangutans face in the wild and what can be done to protect them. His goal is to help get them taken off the endangered species list. He makes videos, gives talks at schools, and wrote the children’s book, “Kawan the Orangutan Lost in the Rainforest.” He’s already won the President’s Environmental Youth Award for his efforts.

Jack started to get involved in saving orangutans a couple of years ago after a trip to see a baby orangutan at the Memphis Zoo. The family was in Tennessee for his father Timothy Dalton’s work. It was at a birthday party for a baby orangutan that Jack learned about orangutans and their endangered status, and how it was tied to palm oil production, Jack said.

“I had a special encounter with (the baby orangutan) and ever since I’ve been doing what I can to help orangutans,” Jack said.

Palm oil is used in food and cosmetics, and mostly comes from plantations in Indonesia and Malaysia. Those large-scale operations ruin the natural habitat for the apes. Plantation workers knock down trees that provide the canopy where orangutans live. Even when a new tree is planted it can take decades before it is a suitable habitat for an orangutan.

Jack started by writing a letter to the heads of companies that use palm oil in their products. His parents, Heather and Timothy Dalton, recorded Jack reading the letter and posted it on social media. Then Jack went viral.

“I could have never imagined doing something like this. I just knew I wanted to do something to help orangutans,” he said.

Heather Dalton is proud to watch as protecting orangutans has become her son’s passion and purpose.

“It’s a lot of fun watching him do his thing. Who knows what will be next,” she said.

Jack was picked for the Action For Nature Award by a panel of independent judges including experts in environmental science, biology, and education. The group has recognized more than 300 Eco Heroes from over 30 countries and 25 states since 2003.

“The projects that these young people created will not only have real, positive impacts on their communities, they will also help solve global climate challenges and inspire others – no matter what age – to consider what they can do to help,” Kay said.

Jack said even small steps help along the way, and he tells other people they can make a conservation difference, too. Even simple choices like using a disposable straw, or writing on both sides of a piece of paper, can add up to big changes.

“A lot of people think, ‘I’m just a guy,’ or ‘I’m just a girl. I don’t have time to help with conservation.’ But there are little ways we can all help in everyday life,” Jack said.