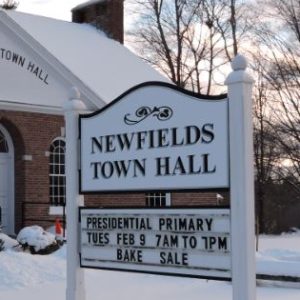 After 18 months, Newfields Police Prosecutor Michael DiCroce is finally giving up on the case against an NHJournal reporter who was charged with a crime while covering protests outside Gov. Chris Sununu’s house.

DiCroce said he was tired of losing.

“We’ve tried eight or nine of them before Judge (Polly) Hall and she’s found all of them not guilty,” DiCroce said. “I’m not going to waste my time prosecuting the one or two left.”

On December 28, 2020, Newfields police used a controversial new ordinance to ticket protesters gathered outside Sununu’s home. They also ticketed Chris Maidment, a NHJournal reporter at the time who was covering the protest. Maidment repeatedly informed authorities he was a reporter and his coverage of the protest appeared at NHJournal the next day. Still, DiCroce insisted on prosecuting the case and does not concede the police did anything wrong.

“Town officials knew he was a reporter. I spoke to the prosecutor myself,” said NHJournal Managing Editor Michael Graham. “We repeatedly requested they drop this case, and they repeatedly declined. The fact that they still won’t admit that arresting a reporter for doing his job is wrong — particularly when politics are at play — should concern every First Amendment supporter in New Hampshire.”

DiCroce declined to say why he persisted in prosecuting Maidment.

“That’s something you’ll have to ask State Police,” DiCroce said.

New Hampshire State Police were involved in the protests by providing security for Sununu. However, documents obtained by NHJournal through a Right to Know request show Newfields Police coordinated with State Police, sharing information on the anti-picketing ordinance, and coordinating the press release about the original arrests.

“It’s quite obvious this case was without legal merit and a blatant First Amendment violation,” said Maidment, who now works for the New Hampshire chapter of Americans for Prosperity.

Concord attorney Seth Hipple, who represented several people charged that night including Maidment, said the government had a losing hand from the start.

“The prosecution’s case was a dumpster fire,” Hipple said.

None of the arresting officers were able to individually identify any of the protesters who were charged, and they were unable to specify what actions the protestors took that violated the law.

“It seemed really clear to me throughout this case the focus of law enforcement was to shield (Sununu) from seeing anybody protesting in front of his residence,” Hipple said.

After Sununu began conducting government business from his home due to the COVID-19 pandemic, opponents of the governor’s COVID-19 policies shifted their protests to the cul-de-sac outside his home.  Sununu and his neighbors expressed their unhappiness with the crowds of sign-waving demonstrators, but the protestors were on public property.

In response, the town Board of Selectmen, including Sununu’s brother Michael, drafted an anti-picketing ordinance designed to discourage — if not prevent — the protests. Three members of the Sununu administration, including Department of Safety Commissioner Robert Quinn, testified on behalf of the protest ban at a December 8, 2020 select board meeting.

Hipple said the town used legal language that was constitutionally problematic in the ordinance. The way it was enforced and prosecuted by Newfields police was even more problematic.

“The fact they arrested a reporter and continued to prosecute a reporter who identified himself shows it has nothing to do with enforcing the law,” Hipple said. “It’s definitely true that the impetus for passing this ordinance was that they didn’t want to have protests where (Sununu) was conducting state business.

The language for the ordinance came directly from the Attorney General’s Office, according to emails obtained by NHJournal.

The process began with a November 24, 2020 email from Michael Sununu to Newfields Police Chief Nathan Liebenow regarding, “complaints I have received from several residents on Hemlock [Court] regarding the protests this past weekend,” and suggesting existing town ordinances “which we need to consider enforcing.”

Chief Liebenow told Broadhead he had been “speaking with his Board in Newfields” about town ordinances that “are most relevant/applicable in our situation.”

On November 30, 2020, Broadhead responded by suggesting potential language for an anti-picketing ordinance he believed could pass court muster.

“Chief, FYI, in a U.S. Supreme Court case, Frisby v. Schultz… the U.S. Supreme Court upheld the following ordinance: ‘it is unlawful for any person to engage in picketing before or about the residence or dwelling of any individual in the town of Brookfield.’ The court ruled that this ordinance does not violate the First Amendment,” Broadhead wrote.

That language was eventually adopted word for word by the Newfields select board.

Sununu’s team has denied the governor had anything to do with the ordinance or its passage.

Maidment said he expects the involved parties to do the right thing.