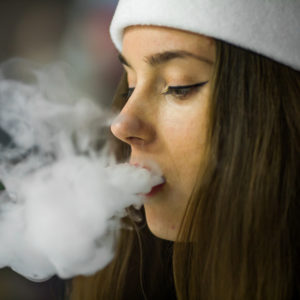 According to data from the New Hampshire Department of Revenue Administration, tobacco taxes are already $25.4 million over budget since July 1, one month after the ban took effect.

A 90 percent bump in menthol stamps leads the year-to-year increase in Granite State tobacco sales according to the report. Overall, cigarette sales are up 46 percent, while in Massachusetts they are down almost 24 percent.

Hit hardest, he says, are the gateway communities with larger minority populations, where menthol cigarettes are more popular. “Countrywide, menthol makes up a 30 percent share of the tobacco market,” according to Shaers.”In cities such as Lowell, Fitchburg, Leominster – with diverse populations and high numbers of minority smokers – the menthol share can be closer to 60 to 70 percent of the tobacco category.”

“I challenge anyone to demonstrate how this ban has been effective,” Shaer said in a statement. “New Hampshire and Rhode Island imports have replaced sales once made in Massachusetts by licensed retailers. In fact, the latest data shows an uptick in cigarette sales when you combine the increases for non-flavored cigarettes in Massachusetts with total cigarette sales gains in New Hampshire and Rhode Island. Massachusetts small businesses have lost, the Massachusetts budget has lost, public health has lost, and youth who this law was allegedly intended to protect have lost since prevention revenue has greatly diminished.”

This is hardly a surprising outcome. During a recent InsideSources roundtable about government attempts at prohibition, the Tax Foundation’s Ulrick Bosen shared his research showing similar impacts on Massachusetts revenue.

“I found significant increases in all the neighboring states simply because Massachusetts banned a popular product,” Boesen said. “That means they did not achieve their public health goals, which was fewer people who smoke.”

Shaer says a similar phenomenon will occur when the Transportation Climate Initiative is adopted in Massachusetts, noting that “we already see it now, with the delta in gasoline excise taxes in the two states.” It was one of just three states to embrace the regional “cap and invest” plan to raise gas taxes and spend the new revenue on mass transit.

“It will be interesting to see what happens in the next twelve months,” Shaer says. “At the federal level, we’ll have a Biden administration that has made climate change a core tenet of their platform, and Democrats now control the House and Senate. We could see a federal carbon tax that in some ways pre-empts what TCI is trying to accomplish.

“These Governors will have to decide if they want to adopt extra state regulations on top of whatever might come from D.C.,” Shaer said.