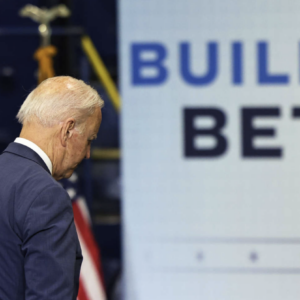 As President Joe Biden’s poll numbers have fallen and Democrats’ prospects for 2022 have dimmed, party loyalists have largely pinned their hopes on two predictions: Passing the Build Back Better bill will boost their fortunes, and a U.S. Supreme Court ruling undermining Roe v. Wade this summer will set off a political avalanche over abortion.

But the latest New Hampshire Journal poll finds that, in the Granite State, those are unlikely outcomes.

In particular, Granite Staters overwhelmingly oppose Democratic efforts to raise the cap on state and local taxes (SALT) from $10,000 to $80,000. It’s a policy that would overwhelmingly benefit wealthy taxpayers in high-tax states like Massachusetts, New York, and California.

The Build Back Better bill would raise the cap on state and local tax deductions from $10,000 to $80,000, with most of this benefit going to the highest-income Americans. Would you support or oppose this policy?

Reps. Annie Kuster and Chris Pappas both voted for the House version of the BBB that included the SALT cap provision, which is estimated to cost $275 billion over the next five years. But when Pappas announced he was running for a third term a few weeks later, he told WMUR’s John DiStaso he actually opposed the measure.  “We need to negotiate that deduction to a level far lower than it is now,” Pappas said.

“It sounds like Chris Pappas was for the SALT deduction deal before he was against it,” said John Corbett, spokesperson for Matt Mowers’ campaign, who noted it would have only taken a handful of Democrats to stop the bill from passing in the House.

“When presented with a choice, Chris Pappas ultimately chose tax breaks for billionaires at the expense of New Hampshire families who will pay for it in higher energy and food costs. The bottom line? Chris Pappas’ promises should always be taken with a grain of salt.”

Voters aren’t keen on a provision Kuster and Pappas voted for granting work permits to illegal immigrants so they could remain in the United States for up to 10 years, either. They oppose it 44-53 percent.

If those provisions aren’t stripped out of the bill, both Sens. Maggie Hassan and Jeanne Shaheen will be voting to back them, too.

All four members of New Hampshire’s congressional delegation have already voted for another unpopular policy that also benefits upper income households. The bipartisan infrastructure bill Biden signed into law included a provision to give tax breaks of up to $12,500 for people who buy electric vehicles. Only 43 percent of Granite Staters support it while 51 percent are opposed.

It’s another taxpayer-funded benefit that would largely go to the wealthy in states like California. In New Hampshire, virtually nobody drives EVs. According to vehicle registration data, as of the end of 2020, there were just 2,690 EVs in the entire state.

Republican strategists, however, say the Democrats’ real problem isn’t the devilish details, but their broad failure to address the big issues Americans are concerned about. What are those issues?

According to the new NHJournal poll, inflation is the top concern among Granite Staters, followed by COVID-19. Crime, climate change, and jobs were closely bunched together, while abortion was far back from the rest of the pack at 4 percent.

The margin of error on this poll is 3.5 percent.

It’s hard to see how an issue that ranks as low as a priority as abortion can change the fortunes of Democrats campaigning next year. And it’s worth noting that about one-third of respondents who named abortion as their top priority are Republicans. Their priority is likely more abortion restrictions, not outrage over a potential assault on Roe v. Wade.

In fact, independent and swing voters barely mentioned abortion as a priority in this poll. Just one percent of self-identified moderates and two percent of unaffiliated voters named abortion their top priority. Among swing voters, the response was too small to register.

In other words, if there is a surge of reaction to a Supreme Court decision on Roe next summer, it’s likely to be among people who are already motivated to vote their abortion politics already. Swing, moderate voters just don’t think it’s a priority.

The results are from a New England Polling survey based on online interviews with 729 New Hampshire registered voters. Interviews were collected between December 9 and 10, 2021, with a margin of error of +/- 3.4 percent.