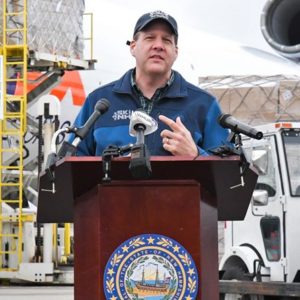 New employment statistics released Tuesday were good news for Granite State workers, troubling for desperate employers, and a reminder to New Hampshire Democrats just how hard it will be to unseat incumbent Gov. Chris Sununu.

Republicans were quick to tout the new numbers as proof the GOP agenda since they took control of state government in 2020 has been working.

“Thanks to smart management through the pandemic, and historic tax cuts across the board, New Hampshire can enjoy the good position that it is in today,” said Speaker of the House Sherman Packard (R-Londonderry). The most recent jobs numbers show impressive job growth and a significant drop in the unemployment rate. Legislators will continue to work on improving the economic future of New Hampshire to ensure it is the best place in which to work, live and raise a family.”

“These numbers are yet another good indicator that what New Hampshire is doing is right, especially the strong job growth within the private sector,” said Bruce Berke, state director of NFIB New Hampshire, who also noted “the State’s business tax receipts which are outperforming revenue estimates.

“Decisions being made (or not made in some instances) in Concord are producing results for the people of New Hampshire, and that includes wage growth for workers,” Berke said.

“New Hampshire’s latest job numbers continue to show the strength of the state’s economy and its employers,” he said. “The increased number of employed residents is great news as New Hampshire employers have struggled over the past year to find staff. That said, many employers still need workers and efforts to grow our workforce remain vital, including increasing housing opportunities.”

State Sen. Tom Sherman (D-Rye), who announced his bid for governor on Monday, credited the “strong national economy” rather than the Sununu administration.

“I don’t think we should say we’re doing well when too many Granite Staters are struggling to afford child care, housing and energy costs, and even groceries,” Sherman told NHJournal. “Our workforce is still 22,000 below where it was pre-COVID so there’s significant work to do, yet this governor is focused on passing restrictive abortion bans and sending taxpayer dollars to private and religious schools, when we need to be doing more to make sure our economy works for all Granite Staters.”

Sherman has made housing a top priority of his campaign and Sununu is doing the same. The morning the jobs data were released, Sununu was in Portsmouth delivering a speech to the Chamber Collaborative of Greater Portsmouth.

According to media reports, he pushed the progressive, seacoast community to develop more multi-family housing.

“I’ve got to be really clear. There’s no state (law) that’s preventing you guys from building multi-family housing,” Sununu said. “It isn’t just high-end condos that we need. That’s the last thing we need frankly. We need housing for teachers (and) nurses.

“This idea that a small town doesn’t have a responsibility and the opportunity to create multi-family housing is just really antiquated.”