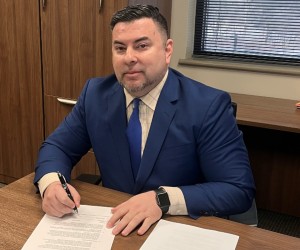 Linkous was named this week as the next superintendent of the 11,000-student district that has been dealing with COVID-19-related turmoil since 2020. He is currently chief of staff for the Kansas City, Kansas Public Schools and is slated to start in Nashua on July 1.

“I am extremely excited to have been selected as the next superintendent of the Nashua School District. I believe we have a great staff, community, Board of Education, and most importantly great students,” Linkous said in a prepared statement.

Linkous was among the Kansas public education leaders who waged a battle against that state’s expansion of its education savings account program last year. While the expansion allowed more low and moderate-income families to attend private schools, Linkous and others protested it would take money from the public school system.

His pick as the next Nashua superintendent comes as the Granite State has successfully rolled out its own school choice program that is used by more than 1,600 families statewide. In Nashua, 77 families are using the Education Freedom Accounts to attend private school or pay for homeschool materials.

Sarah Scott, director of grassroots operations with Americans for Prosperity–New Hampshire, hopes Linkous’ selection does not signal a new animosity toward families who want school choice. Nashua is already home to several charter schools and private schools, including the Academy of Science and Design, one of the top-rated charter schools in the state.

“It’s clear that the community of Nashua sees the value in giving families choice when it comes to education. We hope the school board and school administration’s views and actions reflect the Nashua community’s commitment to education opportunity,” Scott said.

While New Hampshire’s Education Freedom Accounts have proved popular, they are opposed by the state’s education establishment. Democratic politicians at the New Hampshire State House are trying to rescind the program altogether, or restrict who can take part.

“Given the new public health guidance released today, mask requirements in school policies are inconsistent with the Ed 306 rules,” a spokesperson for the state Department of Education said in a statement.  “A mask requirement may violate the district’s obligation to maintain policies that ‘Meet[] the instructional needs of each individual student.'”

Linkous was a strong proponent of masking in Kansas.

“The safety of our staff and students is No. 1,” he said at the start of the current school year. “Getting masks on, they’re not always the most comfortable thing. They are going to keep us safe.”

Linkous is taking over a district that was a flashpoint in the Granite State’s fight over how far to take COVID mitigation policies. Nashua parents were frustrated by decisions made by outgoing Superintendent Jahmal Mosley during the COVID-19 pandemic. While schools throughout the state tried to balance safety and educational needs, Nashua public schools went completely remote for nearly a year. The remote class started in March of 2020, and students stayed in remote until March 2021, when Gov. Chris Sununu issued an executive order forcing schools to return to in-person learning.

Some parents pulled their kids and went to private schools. Others waged a fight to pressure the school system to change policies. An organization called Nashua Parent Voice, with hundreds of members, rose up to advocate returning children to classrooms.

Data show the decision to close classrooms has led to massive education loss and an increase in mental health issues, particularly among low-income families and communities of color. Nashua has one of the most diverse populations in the state.

Mosley announced his plans to leave citing his difficult relationship with the board.

“As much as I want to see this district move forward and our strategic plan take hold, it is no longer feasible or tenable for me to manage a district as well as manage a school board that has been unable to work as a cohesive unit for many years now,” Mosley said in his resignation letter. “Our fundamental differences on governance, race relations, and re-opening of schools during a pandemic have proven insurmountable.”

Nashua’s Board of Education meetings devolved into debates over issues like remote learning, mask requirements, Critical Race Theory, transgender acceptance, 2020 election conspiracies, and other hot button issues. The protests began with parents advocating for children, but for a time, critics say, they were overtaken by extremists using the meetings to further political agendas beyond education.

“I look forward to listening, collaborating, learning, and leading as we continue the excellent work in many areas, and as we create excellence in others. I look forward to becoming a member of the Nashua community very soon,” Linkous said.