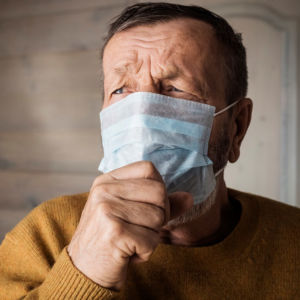 As of May 3, there have been 86 reported COVID-19 deaths in New Hampshire. That number is a tragedy.

That number — four– is an opportunity.

When a healthy 30-year-old woman wants to know why she can’t go back to work, what’s the answer? That there’s an 80-year-old she might put at risk? The obvious rejoinder is that the 80-year-0ld should be quarantined, not her.

Mean-spirited? Perhaps. But check the math as of April 27: 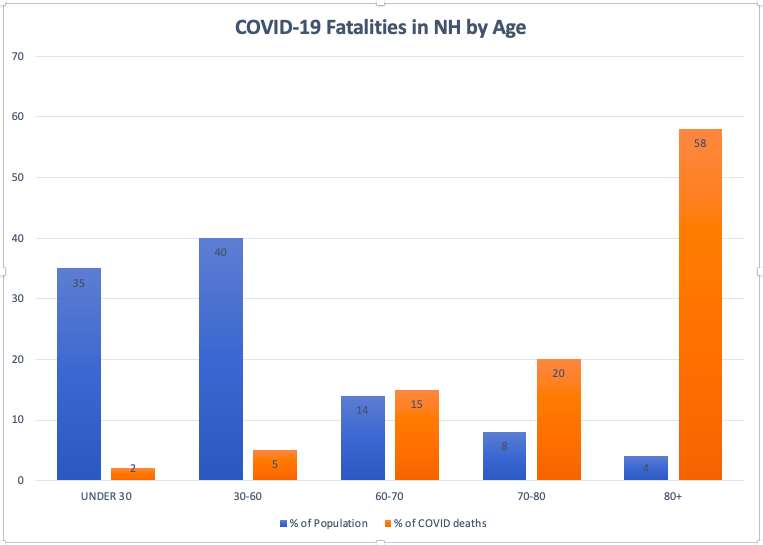 The over-80 fatalities are shocking and sad. At the same time, they are also a reliable indicator that the rest of the population has options about returning to their lives. Families with elderly members in the home have tough decisions to make. But most New Hamsphire working-age households don’t have elderly residents.

And it’s not just New Hampshire. Nationwide, 31 percent of coronavirus deaths have been people 85 and older. People 65 and older are about 80 percent of the nation’s COVID-19 deaths.

Opponents of relaxing the stay-at-home order often portray any discussion of the demographic data as being dismissive of the elderly. “Killing Grandma” is the debate shorthand.

What they’re ignoring is the flip side:  If you’re not approaching retirement age, you’re in very little danger of dying from the coronavirus. Granite Staters under 60 are 75 percent of the population but just 7 percent of the fatalities.  And since these numbers were released, there have been 24 new deaths –all of them people over 60, and many in nursing homes. That brings the percentage of under-60 deaths down to 4.7 percent…and falling. 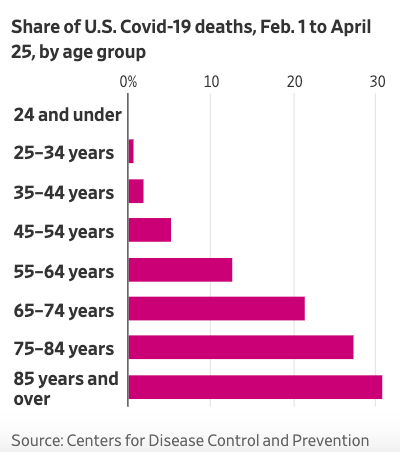 When Granite Staters return to work and school and life, will the infection rate increase? Of course. Will more Granite Staters under 60 die? Once again, of course.  Is there anything short of inventing a vaccine that can prevent it? No.  But with numbers like these, how are the risks of returning to work higher for healthy, non-elderly people than the risks of staying home?

What about the elderly? It’s a real problem, and any #ReOpenNH advocates who deny it aren’t being honest. And yes, elderly people (and obese people and diabetic people and male people) will continue to die disproportionately. But that doesn’t mean lives can’t be saved, people can’t be protected. There’s no 100 percent solution, but overwhelmingly Granite Staters have shown they are taking the coronavirus threat seriously and behaving responsibly. Give them guidelines for visiting elderly family members, tell them they need PPE for family reunions and they’ll wear it.

The same for older and immune-system challenged people, too. They know the risks, and they can reduce their exposure. Their lockdown may have to last longer — perhaps significantly longer — than society as a whole. Think that’s unfair? Complain to the virus.

According to the US Centers for Disease Control and Prevention, fewer than 2 percent of the 150,000 American COVID-19 cases are people under 18. The same is true in the global numbers, too.

And while the data isn’t 100 percent confirmed, multiple studies appear to show children either don’t spread the virus at all, or are poor transmitters. As a result, Switzerland’s top infectious disease official said, “Young children are not infected and do not transmit the virus,” and announced a national policy of allowing young children to hug their grandparents.

The Swiss Health Department also says “reopening schools does not seem to be a major problem.”

So why not reopen schools in New Hampshire, too? Assuming this research is confirmed and the transmission rate and death rates remain extremely low, is the academic, economic and emotional price we’re inflicting on children and their families worth it?

If your argument is “If it saves just one life,” then no. But using that standard, New Hampshire could stay in lockdown forever.

Now that the “flatten the curve” goal has been achieved and hospitalizations are well below 10 percent of available beds; and the risks are overwhelmingly specific to less than a third of the population, what’s the argument for keeping the other two-thirds of New Hampshire shut in and locked down?

Yes, there will still need to be restrictions– masks, gloves, social distance, etc. And testing/tracking/tracing can slow down the spread even more.

But with the state going broke, the ability to pay for essential services like cops and teachers at risk, businesses disappearing and jobs destroyed — isn’t it time to put the coronavirus math to work in New Hampshire’s favor?