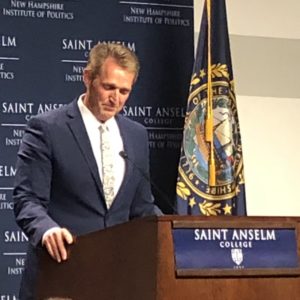 What does Jeff Flake want?

That was the question running through the crowd at St. Anselm College in Manchester, NH Monday night after the Arizona Senator addressed the New Hampshire Institute of Politics. And it’s a question that frustrated Republicans across the U.S. have been asking since he derailed Judge Kavanaugh’s confirmation last week.

On Friday, Sen. Flake stopped the Kavanaugh confirmation process in its tracks by forcing the GOP to wait for an FBI investigation into uncorroborated accusations against the Supreme Court nominee.  If Flake and the GOP had simply stuck together, Judge Kavanaugh would be on the verge of becoming Justice Kavanaugh right now.  Instead, Flake says he still plans to vote for Kavanaugh, assuming the FBI doesn’t find evidence corroborating Dr. Christine Ford’s claims.

So what did Flake accomplish?

Then on Monday, Sen. Flake came to “First In The Nation” New Hampshire and spoke at a venue that’s a mandatory stop on the presidential campaign trail to give a high-profile speech. But instead of announcing a potential presidential bid or laying out a plan to bring bipartisanship to Washington, Sen. Flake merely repeated his oft-stated complaints about political tribalism. And, as he often does, he focused his complaints against his fellow Republicans, leaving the implication that the lack of bipartisanship is an entirely partisan problem.

Once again, other than insulting his own party’s voters, what did Flake accomplish?

If you’re waiting for Sen. Flake to tell you, don’t hold your breath.

A student at St. Anselm, who admitted to Inside Sources that he only attended Flake’s speech for class credit, said “He gave the same speech that last time I had to come listen to him.” (Flake spoke at the NHIOP’s “Politics and Eggs” event in March). The student was right. Sen. Flake’s speech was essentially a reprise of the same speech he gave months ago: America’s politics have become too partisan and tribal, we need more bipartisan cooperation, it’s a shame that Republicans are so angry and ugly, etc. etc.  Take out the handful of references to the Kavanaugh case (“I asked for the FBI investigation because I needed more information before I could support him”) and add some more attacks on Trump, and it’s the same speech Flake gave the last time he was in New Hampshire.

And nobody in New Hampshire knew why he gave that one, either.

“He certainly seems very sincere,” one longtime New Hampshire Republican said after his speech Monday night.  But he didn’t give any indication of what he was trying to accomplish. Does he want to take on Trump?  “Not really thinking about it,” he said during a post-speech press gaggle.  “There’s too much going on in Washington now. I still have three months left in office.”

He certainly didn’t mention a POTUS bid in his speech. In fact, he barely mentioned the president directly in his comments. He never hesitated to call him out in the past:

“Our presidency has been debased. By a figure who seemingly has a bottomless appetite for destruction and division,” Flake told Harvard Law School graduates in May. “We did not become great — and will never be great — by indulging and encouraging our very worst impulses. It doesn’t matter how many red caps you sell.”

Why the change in tone?  Is it because Flake has figured out that going full anti-Trump is a political loser with GOP primary voters?  It’s a bit late for that now.  One of the reasons Flake was essentially forced out of office in Arizona was his continuous criticism of President Trump, which drove away his own GOP base. And–because he’s still a Republican–he can’t get much Democratic support, either.

As a result, Flake is in a political no-man’s land. He’s loved by the press, and his attacks on the GOP are praised by Democrats…but nobody is actually on his side. Proof was provided Monday morning when, just days after he did Democrats the favor of single-handedly delaying the Kavanaugh confirmation, Flake was still greeted by hundreds of angry protesters during a public appearance in Boston.

Flake condemns Republican “tribalism,” complaining that “we Republicans have given in to our tribal impulses” to “dehumanize our enemies.”  But haven’t the Democrats done the same?  When Flake brags that “I had failed my tribe. I’ve been failing my tribe for some time now. I hope to continue to fail my tribe,” isn’t he simply telling his political allies to take a hike, while letting Democrats off the hook?

Inside Sources asked Sen. Flake about complaints from Republicans that he’s proposing “unilateral disarmament”—Republicans agreeing to help Democrats get their way, while Democrats declared the GOP bigots, “angry drunks” and haters. Flake had no answer, other than to insist that “It can’t be.”

“Our problems are too big problems and have to be solved, and no one party can solve them. So we have to get away from that.”

That’s hardly an answer GOP primary voters will find satisfactory.  They believe that the Democrats response to calls for self-sacrificial bipartisanship is always going to be “Sounds great. You go first.”

Tom Rath, an influential moderate Republican who’s worked on key presidential races in New Hampshire, told Inside Sources that, at this point, a successful Flake primary of President Trump in the Granite State is a longshot—but there is a potential path forward.

“If the Democrats come up here—Senator Booker, Senator Harris, Avenatti—and they’re all pushing each other to the extremes, to the Left, to see who can be the loudest; and meanwhile President Trump comes up and does what he does;  In that case, it’s possible to see a scenario where independent voters would say ‘Nobody’s talking to me.’ And because independent voters can pull the GOP ballot in New Hampshire, there could be an opportunity here.”

But why would Republicans ever back Flake? He fails the “Trump” test on both counts: He’s not a supporter, and he’s not a fighter.

By calling the president a demagogue and insulting Republicans who support him, Flake stands in opposition to the most popular politician in his party.  That’s strike one.

Then Flake adds to the failure by refusing to fight.  He’s essentially on a national “This is too hard, I quit!” tour of American politics.  His speech Monday night wasn’t a battle cry to restore bipartisanship and return to libertarian/conservative principles.  It was a beaten schoolkid’s complaint: I lost to a bunch of meanies.

“If you listen, what Flake’s really saying is ‘Isn’t it a shame that everyone else isn’t as good as me?”, one Republican quipped at the NHIOP event.

In American politics, things can change quickly. But until they do, Sen. Jeff Flake will remain, as he called himself  Monday night, “a man without a party.”

And for the moment, both parties are totally fine with that.