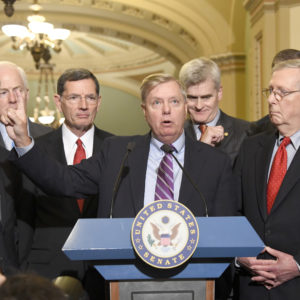 United States Senator Lindsey Graham (Republican of South Carolina) speaks to reporters outside the US Senate Chamber following the Republican weekly luncheon caucus in the US Capitol in Washington, DC on Tuesday, September 19, 2017. The GOP leadership is advocating for the passage of the Graham-Cassidy Act that would replace parts of the Affordable Care Act (also known as ObamaCare) with block grants for the individual states. From left to right: US Senator Roy Blunt (Republican of Missouri), US Senator John Cornyn (Republican of Texas), US Senator John Barrasso (Republican of Wyoming), Senator Graham, US Senator Bill Cassidy (Republican of Louisiana) and US Senate Majority Leader Mitch McConnell (Republican of Kentucky). Credit: Ron Sachs / CNP /MediaPunch/IPX
News

Political leaders from both sides of the aisle in New Hampshire have soured on the proposed “Graham-Cassidy” healthcare legislation in Congress as the bill appears to threaten budget challenges for the Granite State.

Senate Majority Leader Mitch McConnell said he expects to hold a vote next week on Graham-Cassidy. The bill faces a Sept. 30 deadline due to a rule which allows Senate Republicans to pass legislation with only a simple majority.

The bill already appears doomed as three Republican senators have already said they will vote against it. On Friday, Sen. John McCain of Arizona said he would vote no and encouraged Congress to work across the aisle to find solutions as he expressed concern that Graham-Cassidy would hurt more people that it helped.

“I believe we could do better working together, Republicans and Democrats, and have not yet really tried. Nor could I support it without knowing how much it will cost, how it will affect insurance premiums, and how many people will be helped or hurt by it,” said McCain.

According to data analysis by Avalere, a Washington, D.C.-based consulting firm, Graham-Cassidy would reduce federal funding to states by $216 billion over the next decade. New Hampshire is projected to lose $14 billion in federal funding between 2020 and 2036, with much of that coming after a funding cliff in 2026.

The bill also raises concerns about how that money is directed by the states and potential harm to those above the poverty line.

“The bill creates a financial incentive for states to direct coverage to very low-income residents near or below the poverty line, potentially at the expense of lower-middle-income individuals who currently receive exchange subsidies,” said Chris Sloan, senior manager at Avalere.

Republican Gov. Chris Sununu, who was briefly involved in the bill’s drafting process, came out against the legislation this week.

“Gov. Sununu does not support Graham-Cassidy as it is currently drafted. The extent of Gov. Sununu’s involvement in providing suggestions during the drafting process was that he participated in two phone calls with other governors across the country. The first call was to solicit input from various governors. The second phone call discussed the broad concepts of the bill, at which point our office received the finalized text of the bill. Once we analyzed the impact of Graham-Cassidy on New Hampshire, Gov. Sununu issued a statement saying that he could not support the bill as it was currently written.”

Sununu has indicated his concern with the bill stems from an analysis by the New Hampshire Department of Health and Human Services which found the loss of Medicaid funds in Graham-Cassidy could threaten the state’s tradition of having no sales or income tax.

New Hampshire’s entire congressional delegation, which is comprised of four Democrats, publicly announced its opposition to the proposed legislation this week.

Sen. Jeanne Shaheen sent out an email with the subject line “They’re at it again” on Sept. 18, writing that Graham-Cassidy “would take a wrecking ball to healthcare coverage in New Hampshire.” The next day, Shaheen delivered a speech on the floor of the Senate where she said, “This new bill, they call it Graham-Cassidy but it really is Trumpcare.” She criticized the political process behind the bill’s drafting, specifically citing its lack of Democratic involvement or public hearings, before focusing on the details of the bill.

Shaheen said Graham-Cassidy would take away coverage for 30 million Americans while making “profound cuts” to Medicaid. She said this would be a “tragic setback” to the fight against the opioid epidemic which affects 1.3 million Granite Staters. Shaheen said 49,000 Granite Staters have gotten coverage through the ACA insurance markets and 110,000 residents have received life-saving treatment.

On the same day as her speech, Shaheen spoke to CNN’s “New Day,” saying New Hampshire was in line to lose $410 million in federal funding.

Sen. Maggie Hassan also delivered a speech on Senate floor on Sept. 19, saying she was disappointed with the “latest, disastrous iteration of Trumpcare.” Hassan said Graham-Cassidy represented one last ditch effort to “pass partisan legislation,” echoing Shaheen’s concerns about the drafting process for the legislation. She said the CBO would not be able to provide a score on the bill before the Sept. 30 deadline.

Hassan said ending Medicaid expansion in New Hampshire would hurt efforts to combat the opioid epidemic while forcing states to choose between “slashing benefits, care, or both.” Hassan stated in her conclusion she would continue to actively oppose the bill and urged Granite Staters to do the same.

“Together we will once again defeat this attempt to undermine the healthcare of millions of Americans. And we will make clear that all of our people must be able to get quality, affordable care,” Hassan said.

A spokesperson for Rep. Carol Shea-Porter said she is “definitely opposed” to Graham-Cassidy, as she objected to previous Republican repeal-and-replace efforts. Shea-Porter also sponsored an amendment to the House of Representatives’ omnibus appropriations bill to fully fund the Navigator enrollment program offered through the ACA.

“The Graham-Cassidy healthcare bill would be a disaster for hardworking families in New Hampshire and across the country. It would slash $410 million in healthcare funding for New Hampshire by 2026 and threaten access to care for people with preexisting conditions. Graham-Cassidy would allow states to eliminate essential benefits jeopardizing access to mental health and substance misuse services at a time when we’re just beginning to make headway against the opioid epidemic. In short, I agree with Governor Chris Sununu and elected leaders on both sides of the aisle, Graham-Cassidy is wrong for New Hampshire and it’s wrong for the country.”