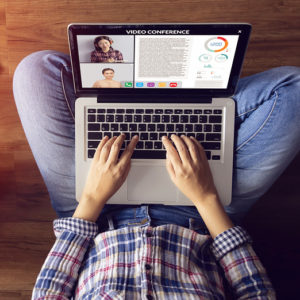 New Hampshire has the best economic environment for working from home in the country, according to a newly released analysis of the workplace impacts of the coronavirus shutdown.  The data also supports the broader trend that lower-income, blue-collar workers are less able to telecommute than their college-educated, affluent counterparts.

Using data on the current percentage of people working from home, the share of potential telecommuters and the level of internet access, the analysts at Wallethub.com named New Hampshire the best “work environment” for remote work in the country and the third best state overall.

“This is because even before COVID-19 it had one of the largest shares of people working from home, and because the majority of households have internet access,” analyst Jill Gonzalez told NHJournal. “Adding to that, the state ranks high in terms of cybersecurity.”

Among the findings, New Hampshire ranks:

New Hampshire is also ranked #8 in median household income, highlighting the socio-economic aspect of the impact of the coronavirus lockdown. The top five work-environment locations are New Hampshire, Delaware, Colorado, Washington, D.C., and North Carolina. All but North Carolina are also among the top 20 highest median income states. The states with the lowest levels of telecommuting include Mississippi, Arkansas, Louisiana and New Mexico, all among the lowest-median-income states.

McKinsey, the international consulting firm, reports that “up to one-third of American jobs may be vulnerable,” due up to the lockdown, “and more than 80 percent are held by low-income workers.”

And not just low-income workers, but those without college degrees as well: “Many blue-collar workers have to be physically present to do their work. They are stocking grocery shelves, cleaning hospitals, caring for the elderly, filling prescriptions, making and delivering food, delivering mail and packages, staffing warehouses and production lines, driving trucks, and collecting trash,” McKinsey reports.

How big is the work-from-home economic divide? Only one in 10 workers in the bottom 25 percent income bracket have jobs that could allow them to work from home, according to the Bureau of Labor Statistics. Among workers in the top 25 percent of income, that number is six in 10.

A Pew Research survey found similar results: 61 percent of those in the upper-income tier say they have worked from home due to the coronavirus outbreak, compared with 41 percent in the middle-income tier and just 27 percent of the lowest income group.

New Hampshire also has the fifth-hardest hit economy in the country due to the coronavirus lockdown, in part due to the fact that the Granite States has suffered the largest increase in unemployment in the country.