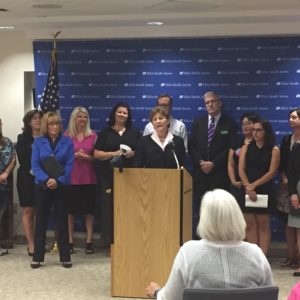 Democratic Sens. Jeanne Shaheen and Maggie Hassan held a news conference at Elliot Hospital in Manchester to address the revised version of the Graham-Cassidy healthcare bill on Monday.

Doug Dean, CEO of Elliot Hospital, introduced the senators by saying he had never seen legislation crafted in such a way during his 40 years of working in healthcare policy.

Shaheen spoke first, saying the latest GOP-led effort to repeal and replace the Affordable Care Act (ACA), also known as Obamacare, was “legislative malpractice.” She said the bill, which is likely to be voted on before the Sept. 30 deadline to pass the bill with a simple majority, will lack a CBO score as well as input beyond a “sham” public hearing held Monday morning.

Shaheen said New Hampshire is projected to lose $410 million in federal funding by 2026, and $3 billion by 2027, as the proposal encourages states to create their own healthcare systems with federal block grants. She said recent revisions to the bill, which includes funding increases for Alaska and Maine, are intended as sweeteners for Sens. Lisa Murkowski and Susan Collins to support the bill.

Collins announced Monday she would not support the bill as it stands, effectively ending any possibility of the legislation securing passage in the Senate.

In response to a question from NH Journal, Shaheen said she has communicated with Republican Senators who remain on the fence.

“I have been in touch with several people to express my concerns, but I don’t know what they’re ultimately going to do,” Shaheen said.

Shaheen said one of her primary concerns with Graham-Cassidy is the removal of federal funding requirements for mental health and substance abuse services, which have been used to fight the ongoing opioid epidemic. She said the legislation is also detrimental to women’s health due to a provision which would defund of Planned Parenthood. Shaheen said the decision would affect nearly 12,000 women in New Hampshire who receive services through the program.

New Hampshire Republican state chairwoman Jeannie Forrester released a statement after CNN’s healthcare debate on Monday night between Graham and Sen. Bernie Sanders, I-Vt. Forrester went on the attack against Shaheen for support of single payer healthcare, which would effectively turn control over the health care system to the federal government.

“She favors a single payer, socialist takeover of our already-failing health care system. Fifty-five percent of Americans oppose the Sanders/Shaheen socialist health care plan. It eliminates employer plans and substitutes them with a one-size-fits-all government solution. At a time in which expanding bureaucracy is causing more problems, not less, in healthcare markets, Senator Shaheen needs to explain why she wants total government control of our healthcare.”

Hassan said she and Shaheen didn’t expect they were “going to be here again” after the failed vote on the Better Care Reconciliation Act (BCRA) in July. She said Graham-Cassidy removes similar consumer safeguards as BCRA, including a restriction against insurance companies charging higher rates or denying coverage for individuals with pre-existing conditions.

She said Graham-Cassidy has met widespread opposition from various advocacy groups and politicians, including the American Cancer Society and American Heart Association as well as Republican Gov. Chris Sununu and all 50 state Medicaid directors.

“Medicaid directors generally don’t get involved in political matters. They’re trying to make the Medicaid programs work for their states,” Hassan said. “But they all came together, all 50, and said ‘please do not do this.'”

Hassan echoed Shaheen’s concerns about how the end of Medicaid expansion could harm New Hampshire’s efforts in the fight against substance abuse. She said funds from the Medicaid expansion allow the state to martial resources against the opioid epidemic in the immediacy but also address future health-related problems across the state such as the rise in cardiac issues and hepatitis C.

Hassan argued the ACA is not perfect but argued repealing the law was not the answer. She said the Senate should revisit a bipartisan approach to fixing health care solutions, namely through negotiations led by Sens. Lamar Alexander of Tennessee and Patty Murray of Washington.

Health care advocates joined Shaheen and Hassan in urging for the defeat of Graham-Cassidy.

Steve Ahnen, president of the New Hampshire Hospital Association, expressed his disappointment in the proposed legislation, which he said would have a “devastating impact” on Granite Staters.

According to Ahnen, with the shift of federal money away from New Hampshire, hospitals in the state would have a difficult time recouping reimbursement costs if Graham-Cassidy is approved. Currently, New Hampshire hospitals receive the lowest Medicaid reimbursement rates of any state in country.

Williams said only 4,100 recipients in long term care reside in nursing homes, which creates an increased need for personal caretakers in the nation’s second oldest state by population. He said it is difficult for New Hampshire to attract young people to work care-taking jobs without offering proper reimbursement.

Michele Merritt, Esq., senior vice president and policy director at New Futures, said Graham-Cassidy is worse than BCRA since it retains provisions which make cuts to Medicaid, end its expansion, remove individual tax credits and will leave 20 million people without coverage. She said the ACA has changed the approach to addiction in New Hampshire as Medicaid reimbursement has ushered in more service providers.

NH Journal made multiple attempts to reach former Republican Sen. Kelly Ayotte to receive her analysis of the plan, the sweeteners for other states, and the efforts by Sen. John McCain to return the Senate to regular order. NH Journal also attempted to contact multiple GOP officials in New Hampshire, none of whom were able to respond to requests for comment ahead of deadline.