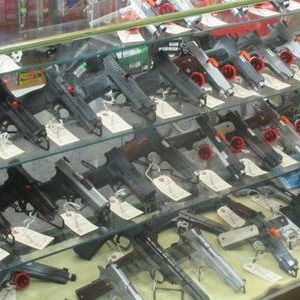 When Republican Governor Phil Scott–who ran as an opponent of expanded gun laws–recently signed a series of gun restrictions into law, he was greeted with cries of “Traitor” from Second Amendment supporters in Vermont. But on the other side of the border, he may hear a different cry:

According to media reports, New Hampshire gun stores in communities along the Vermont border are already seeing an uptick in sales–and are anticipating even more.

“We always get a fair amount of business from Vermont, but there has been a little bit of an uptick the last few weeks,” Dick Basnar of Corey’s Sports Shop in Littleton told Caldonian Record.

Leila Welch, owner of Welch’s Gun and Gift in Lebanon, NH is having a similar experience. “I don’t have many AR’s,” she told the NHJournal, “but I’ve had some magazines [people from New Hampshire] are buying.”

Restrictions on magazines (no more than 10 rounds for rifles, 15 rounds for handguns) are a key part of the new laws that will be taking full effect in Vermont as of October 1st. The law also expands background checks and prohibits people under the age of 21 from buying guns unless they take a government-approved training course.

“Our average murder rate by firearms is four a year, out of a population of 625, 000,” notes Eddie Cutler of Gun Owners of Vermont, a pro-Second-Amendment organization that’s organized opposition to these laws. “Once Gov. Scott, in his infinite wisdom, decided to [find] an excuse to pass gun control, he opened the flood gates and next thing we knew we were up to our armpits in gun control laws.”

And possibly a flood of gun sales in the Granite State beginning this fall.