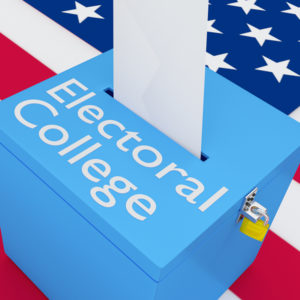 New Hampshire may soon prove the truth of its state motto: “Live Free or Die!” Several state legislators have introduced an election bill that is best explained as a thumb in the eye to California and other states that would like to stifle New Hampshire’s voice in presidential elections.

The Constitution gives New Hampshire the ability to defend itself. Now several state legislators are proposing to do just that.

Their idea sounds admittedly odd at first. New Hampshire legislators propose to withhold the state’s popular vote totals at the end of a presidential election. Those numbers wouldn’t be released until after the meetings of the Electoral College, assuming they aren’t needed for a recount.

The hope is to frustrate an anti-Electoral College effort that has been working its way through state legislatures.

The National Popular Vote organization (NPV) knows that a constitutional amendment formally eliminating the Electoral College would be too hard: That formal process requires the support of 38 states. Thus, NPV instead seeks support for a simple contract among states: Any state that signs also agrees to give its electors to the winner of the national popular vote, regardless of the outcome within its own borders. The compact goes into effect when states holding 270 electors—enough to win an election—have agreed to participate.

So far, 15 states plus Washington, D.C. have signed. Those entities have 196 electoral votes among them. Seventy-four more are needed.

In other words, NPV could effectively eliminate the Electoral College with the support of only a minority of states.

Don’t expect anyone to care about New Hampshire’s primary results once the Electoral College is gone. In a contest for the most individual votes, what candidate will care about little New Hampshire and its 1.3 million people? That’s less than one half of one percent of the United States population.

Fortunately, our Founders knew that small states might need to defend themselves from their larger neighbors. They left states in charge of themselves at election time. And that’s where New Hampshire’s proposal comes in: It can confuse NPV’s ability to generate a national popular vote total. Without that tally, the NPV compact fails.

Remember, there is no official national tally because American presidential elections are conducted state-by-state. NPV’s compact instead assumes that it can rely on an “official statement” from any other state regarding the number of popular votes in that state. Such official statements are to be treated as “conclusive.”

But what if non-NPV states created official statements that are purposefully confusing? The possibilities are endless, and New Hampshire’s proposal is simply the tip of the iceberg.

Perhaps New Hampshire will choose to withhold all popular vote totals, but what if another state were to release totals for winning candidates only? In 2016, Texas could have reported its 4.6 million votes for Donald Trump, even as it refused to report Hillary Clinton’s 3.8 million votes.

Federal reporting requirements can’t prevent Texas or New Hampshire from taking these actions, despite the protests of NPV. Federal law is vague, asking for only “the canvass or other ascertainment” supporting the appointment of electors.

If non-NPV states were to adopt such plans, they would skew the national total, to say the least. But there’s more.

Voters would be fairly represented by electors of their own choosing, and popular vote totals could be released before the meetings of the Electoral College. Yet NPV would have no way to tabulate a coherent national popular vote tally when each voter gets three ballots to cast in two different elections for presidential elector.

Perhaps another state would prefer to keep it simple. It could give each of its voters two votes—or even three!  Most voters will cast all their ballots for the same candidate, but not everyone will. The final tally will be confused—and inflated in favor of that state’s preferred candidate.

Indeed, the real question is: How imaginative are state legislators? How many ideas can they generate for conducting a presidential election, even as they complicate NPV’s efforts to tabulate the national popular vote?

NPV has arrogantly assumed that a minority of states can overhaul the presidential election system, without so much as asking the rest of us what we think.

An attitude of “Live Free or Die” is the perfect antidote.