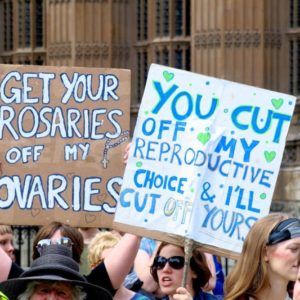 At an Independence Day celebration, a Republican friend asked me about our starting a third party. Then he said it might not work because we disagree on one big issue…abortion.

Surprised, I asked, “You are pro-choice?”  He replied, “Yes, I don’t think we should take a right to abortion away, but I don’t think we should pay for it.” He clarified his position further by declaring his support both for parental consent and for a ban on abortion after 12 weeks. So, while he considers himself pro-choice, his clarifications show that “pro-choice” doesn’t always mean what you think.

In many ways, my friend represents the voters of New Hampshire, which is called a pro-choice state, but when you look deeper, the views on abortion are not so clear. The majority may not want abortion to be illegal, but many people support regulation.

The nuances of abortion are not stopping gubernatorial candidate Steve Marchand from taking one of the most extreme positions in the nation.

Marchand’s extremism contrasts with moderate New Hampshirites’ positions on life. His plan promotes abortion through nine months (most of Europe restricts abortion after the early second trimester), eliminates the Hyde Amendment (which prohibits federal funding of abortion), and abolishes reasonable restrictions of abortion.

Marchand advocates overturning a 2017 law that recognizes children at 20 weeks of pregnancy as eligible to be considered victims of crime. Ask any mother or father who has lost a preborn child as a result of a crime, and she or he will tell you that this law is a good thing. The law has nothing to do with abortion and everything to do with justice for grieving families.

The hostility of Marchand’s plan is frightening and will not win against a Republican incumbent who in recent polls showed a 25-point lead.

To win, Marchand should expand his base of support and recognize that abortion-on-demand is not what most women want. Most women who seek an abortion feel as if they have no choice. They are most often poor, in unhealthy relationships, and/or pressured to abort their unborn children by the fathers or other family members.

Marchand should replace his abortion-expansion plan with a woman-centered plan that whole-life voters would support.

First, he should advocate for paid maternity leave, so that a woman doesn’t have to choose between an abortion and keeping a job she needs.

Second, Marchand should support the thirty-plus pregnancy centers in New Hampshire, which provide diapers, cribs, strollers, clothing, and other necessities for mothers, free of charge.

Third, Marchand should promote perinatal hospice, which supports mothers and families who receive a diagnosis that the child in utero has a life-threatening disease and will likely not survive.

It matters that New Hampshire, which carries symbolic weight when it comes to picking the leader of the country, is seeing a frightening hostility to life in its gubernatorial race.

New Hampshire prides itself for being “first in the nation.” But will it lead the way for life or for hostility?

Kristen Day is Executive Director of Democrats For Life of America. She wrote this for InsideSources.com.