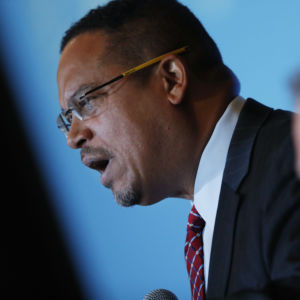 This week, the New Hampshire Democratic Party will hold its annual state committee meeting to elect new officers to serve through the 2018 elections. Judging by their honored guest and keynote speaker, the Democrats have failed to learn anything about the 2016 Presidential election and are instead doubling down on a dangerously extremist leftwing ideology.

On Saturday evening, Minnesota Congressman Keith Ellison will share his vision for America. It’s a vision that will no doubt make the likes of Annie Kuster and Carol Shea-Porter stand on their chairs and cheer. But it’s a vision that should make regular working Granite Staters shudder.

Ellison comes from the extremist wing of the Democratic Party – the wing that puts ideology over the needs and concerns of working families. Consider Ellison’s authorship of an “alternative” budget in 2015. Ellison’s budget called for a breathtaking $4 trillion in job-killing tax increases. He’d want us to believe these were just tax increases on the “rich.” But the truth is Ellison’s budget was no friend to American taxpayers. It advocated for an increased gas tax, increase taxes on retirement savings, restricted itemized tax deductions, jacked up taxes on savings and investments, and imposed a new carbon tax, among other terrible ideas. Ellison’s budget was a smorgasbord of loony leftwing policy ideas that would have put government in control of just about everything while crippling family budgets.

The Committee for a Responsible Federal Budget said Ellison’s budget “offers a more liberal alternative than that proposed by either party or the President.” The President to which they were referring was Obama. Incidentally, Hillary Clinton was too conservative for Ellison, too. He called her a Republican while declining to endorse her in September, 2015.

Worse still, Ellison’s budget represents something of a conservative compromise for him. In it, he calls for a top tax rate of 49 percent. Elsewhere Ellison has advocated for tax rates as high as 63 percent. “There’s plenty of money,” he argued. “It’s just that the government doesn’t have it.”

Rep. Ellison is openly hostile to the rights of gun owners. In Congress, he has proposed legislation to severely limit the amount of ammunition sold and called for a so-called assault weapons ban.

What is the New Hampshire Democratic Party saying about itself by showcasing Rep. Ellison? It appears fully embrace this radical worldview, which is so belligerent to regular working folks. It’s an odd takeaway from an election in which working people walked away from the liberal policies of the Democratic Party in droves.

Ellison is a close ally of New Hampshire Democratic Party Chair Ray Buckley. The Democratic National Committee rebuffed their alliance, which would have made Ellison the party’s national chair and Buckley a high-ranking party official. Apparently, their liberal worldview was too much for the national party to bear. Instead they chose a Clinton insider to head the party.

But this liberal tandem isn’t going away. They’re just bringing their goofy leftwing routine to New Hampshire in hopes of radicalizing the Live Free or Die state.