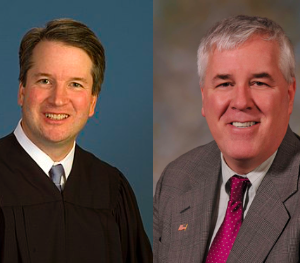 Though Washington, DC is 500 miles from Concord, New Hampshire, many prominent Granite State Democrats have repeatedly spoken out in support of Dr. Christine Blasey Ford and her allegation against Judge Brett Kavanaugh.

“Dr. Christine Blasey Ford’s testimony was detailed, emotional and credible. I believe her. ‪#BelieveSurvivors‪,”  Sen. Jeanne Shaheen said in a tweet after Ford testified.  “Thank you, Dr. Ford. Your bravery and poise as you told your story have touched millions across this country. I hear you and I believe you,” tweeted Sen. Maggie Hassan.

Democratic candidate for Governor Molly Kelly didn’t even wait for Dr. Ford to testify: “Even before we heard Dr. Christine Blasey Ford’s courageous testimony, I believed her,” Kelly said. “I believe women. I will listen to women. And I will stand with women every single day as Governor.”

But when photos were released Tuesday of the bite marks left by their fellow Democrat State Senator Jeff Woodburn in an assault on his partner right here in New Hampshire, these same politicians said…nothing.

The newly-released court documents show disturbing photo evidence of Woodburn’s alleged abuse, as well as diary entries confirming the incidents. If fact, Sen. Woodburn isn’t denying the violence but instead claiming he committed it in self-defense. 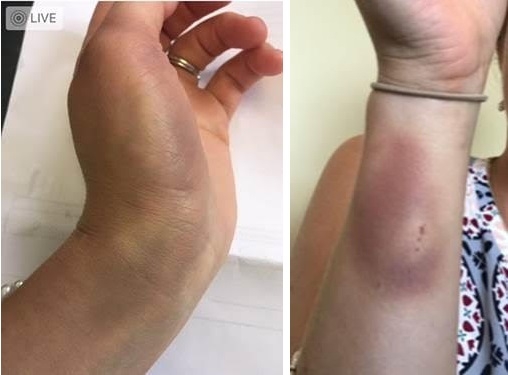 And it’s not just politicians. Questions are being raised over partisan attacks from the New Hampshire Coalition Against Domestic and Sexual Violence against Judge Kavanaugh, while the organization has been relatively quiet on the case of Democrat Jeff Woodburn.

NHCADSV has released a formal statement in support of Judge Kavanaugh’s accuser (“It is with a sense of civic duty and reverence for the Supreme Court that Dr. Blasey Ford has so courageously come forward”) and praised Democrat—and potential 2020 presidential candidate—Sen. Cory Booker. At the same time, they’ve filled their Twitter feed with political commentary and attacks on President Trump and the GOP-led Senate Judiciary Committee.

There is currently no formal statement on their website regarding the Woodburn case, even in the wake of the disturbing new revelations

Is there a double-standard?  Amanda Grady Sexton, Executive Director of NHCADSV says no. It’s all about timing.

“The Kavanaugh case is in the midst of negotiations and potential votes right now, so of course we’re speaking up on behalf of Dr. Ford,” Sexton told NHJournal.  “When the Woodburn case is more active, we’ll be just as outspoken.”

Some Republican backers of the organization are still uncomfortable with the partisan tone in the supposedly nonpartisan group’s messaging. “Just go to their twitter feed,” one Republican supporter told NHJournal off the record. “The difference between how they treat Woodburn and Kavanaugh is obvious.”

But perhaps most important, Woodburn’s victim is satisfied with the support she’s getting from the NHCADSV.

“We’ve been in touch with the Coalition and they’ve done everything we’ve asked them to,” Patricia LaFrance, attorney for the survivor in the Woodburn case, told NHJournal. “They are being quiet, I believe, because they are sensitive to the fact that [the survivor] is trying to avoid public attention and wants to get on with her life while this case moves forward.”

Meanwhile, Sexton says, NHCADSV is calling out Woodburn’s behavior and will continue to do so.

“We were the first group to come out and condemn Sen. Woodburn when the arrest was made,” Sexton said. “And we strongly condemn the tactics he and his attorney, Donna Brown, are using—tactics straight from the playbook offenders use when they are trying to scare victims into dropping their cases.”

Those tactics include, according to Sexton “intentionally distributing the name of the victim—and where she works—to the media, and blaming the victim for his own violence by claiming ‘self-defense.’”

Strong words from the NHCADSV that again raise the question: Where are New Hampshire’s Democrats?

When New Hampshire Democrats like party chairman Ray Buckley, Shaheen, Hassan and Kelly are asked about Woodburn, they are quick to point out that, when the senator was first arrested, they called for him to resign.  And that’s absolutely true.

However, that was also two months ago. Since then, far more facts about Woodburn’s behavior have come to light, including the photos and diary entries.  But unlike the Kavanaugh case, where New Hampshire Democrats tweet out daily attacks, it’s been two months of total silence on the sexual assaulter in their midst.

When Granite State Democrats had the chance to dump Woodburn during the primary in favor of a female nominee, they chose instead to sit on their hands—virtually guaranteeing his victory.

Molly Kelly refused to campaign with—or even endorse—Woodburn’s opponent, Kathleen Kelley. Neither did Sens. Hassan or Shaheen. The one exception was Steve Marchand, who went to the North Country and worked for Woodburn’s defeat. Why was he alone?

Some Democrats are still unapologetically standing by Sen. Woodburn.  When Woodburn returned to the senate floor for the first time after his arrest, he was greeted with applause. Berlin Mayor Paul Grenier not only supports Woodburn’s strategy of outing the name of his victim to the media, but called the survivor a “so-called victim” and said the “real victim” is Jeff Woodburn.

“This whole things smells … This is disgraceful what’s happening,” Grenier said. “It was sealed at the request of the so-called victim and the real victim here is Sen. Woodburn.”

When informed of Mayor Grenier’s remarks by NHJournal, Sexton called them “truly outrageous.”

When asked if the NHCADSV had a message for New Hampshire Democrats about the Woodburn case, she simply said:

“The victims are watching.”