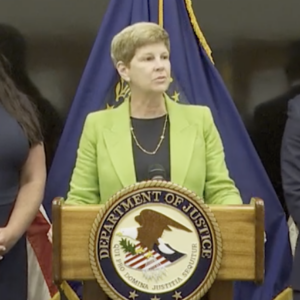 Amid reports of rising overdoses and deaths in the Granite State, the U.S. Justice Department introduced a new task force targeting the illegal distribution of prescription opioids and other prescribed controlled substances across northern New England.

The New England Prescription Opioid (NEPO) Strike Force is a joint law enforcement collaboration among the U.S. Attorneys’ Offices for three federal districts along with the FBI, the DEA, the Healthcare Fraud Unit, and the Health and Human Services Office of the Inspector General. Their enforcement efforts will cover Maine, New Hampshire, and Vermont.

In the past year, 75,000 Americans have died due to opioid overdose according to Aaron Tapp, Acting Deputy Assistant Director of the FBI’s Criminal Investigative Division.

“That is nearly double the population of the City of Concord,” Tapp said.

Between the three states, 1,271 people died from drug overdoses in 2021 according to data collected by the CDC. In New Hampshire, those deaths are on the rise. Through the end of June, Nashua and Manchester have seen a 20 percent increase in opioid overdoses from the same time last year. In the two cities alone there have been 453 overdoses in the first half of 2022 and 45 suspected overdose deaths. Both cities typically have among the highest rates of overdoses and overdose deaths in the state.

There is a similar trend in Vermont and Maine.

In the first three months of 2022, 43 people have died of a drug overdose in Vermont. Ten of those deaths are from a prescription opioid drug overdose, according to Nikolas Kerest, United States Attorney for the District of Vermont.

“Vermont has been a poster child for the opioid epidemic,” Kerest said. “Indeed, we have made the cover of Rolling Stone magazine, and we were called American’s heroin capital back in 2014. Unfortunately, since that time, overdose deaths in Vermont. continue to rise.”

Maine law enforcement has identified the opioid epidemic as the number one issue officers face, according to the U.S. Attorney Darcie N. McElwee for the District of Maine.

“While the trafficking of illegal drugs, in particular fentanyl, is well-publicized, 23 percent of overdose deaths in Maine are the result of pharmaceutical opioids, and many of those who died from illicit substances very likely first tried pharmaceuticals, either their own or those of a friend or family member.”

But in Vermont, counterfeit drugs smuggled across the border are still a greater concern, with fentanyl involved in 93 percent of overdose deaths in 2021. Cocaine laced with fentanyl was the most common lethal combination leading to 46 percent of deaths last year.

The NEPO Strike Force hopes to find the same success, according to DEA administrator Anne Milgram.

“At a time when the United States is losing tens of thousands of Americans to opioid overdoses every year, it has never been more critical to ensure doctors and health care practitioners are prioritizing the safety and health of their patients,” Milgram said.