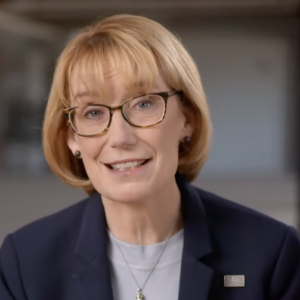 A day after two new polls showed her in an unexpectedly tight re-election fight, a conservative PAC is hitting Sen. Maggie Hassan with an aggressive TV ad campaign on what it calls her ‘left-wing extremism.”

The Frontiers of Freedom Action PAC is launching two new ads, one of them two minutes long, that they said makes the case that Hassan has cast votes far more extreme than her self-declared “bipartisanship” would indicate.

According to George Landrith, president of Frontiers of Freedom, viewers will get the two-minute spot, followed by a one-minute “chaser” summarizing what the viewer has just seen.

“These are not 30-second attack ads that try to manipulate people, but heavily informative narrative ads that work particularly well with independents, women, and young people who appreciate being given context and a story that put a larger perspective around the issues,” Landrith said.

According to the organization, the six-figure buy will put the ads on the local nightly news and Fox News.

For Landrith, the language about “extremism” is key.

“The reason Joe Biden and Democrats are trying to use the ‘extremist’ charge against Republicans is they realize it is their own biggest vulnerability.” As examples of Hassan’s extremism, Landrith pointed to her support for killing the filibuster, for a national election law that would override New Hampshire’s (and, according to former New Hampshire Secretary of State Bill Gardner, endanger the First in the Nation primary); and for ending the Electoral College.

The ad also goes straight after the media, claiming they are carrying water for Hassan and the Democrats.

“We think the New Hampshire media wants to be fair, but they can’t just repeat Democratic talking points,” Landrith said. “They need to give General (Don) Bolduc a hearing and ask Hassan some tough questions like those in our TV spot.” The goal, Landrith says, is to pressure reporters to confront Hassan on issues they would rather avoid.

“It is incredible she isn’t even being asked about her far-left voting record, especially her votes to endanger the presidential primary, or questions about who is really running her campaign.”

“Everything she says and every TV spot is out of the D.C. consultants’ playbook,” Landrith said.

It’s not just the Frontiers of Freedom. A new Senate Leadership Fund ad targets Hassan on crime, claiming she has supported the early release of criminals. “The first early release under her plan was a sex offender convicted of sexually assaulting two children,” the ad says. “No wonder ‘Defund the Police’ groups support Maggie Hassan.”

It is another aggressive attack designed to position Hassan in the progressive wing of her party. In fact, Hassan has never supported the “Defund the Police” movement. And Hassan is apparently taking the crime issue seriously. She released a new ad featuring members of law enforcement like Grafton County Sheriff Jeff Stiegler, who claimed she “voted with Republicans to add a 100,000 new police officers.”

However, she has supported policies, like sending COVID-19 relief checks to incarcerated felons, that are easy targets for “soft on crime” attacks.

The new focus on “extremism” also helps Republicans push back on the abortion issue that political pros agree has helped Democrats in recent weeks. Republicans like Gov. Chris Sununu and Bolduc, among others, have been pointing out Hassan’s abortion-without-limits stance, which is the political fringe in America. The upside of the abortion issue for Hassan is it motivates some voters who don’t often turn out for midterm elections, like young, single women. The downside is her position adds to the case that she is more extreme than voters realize.

“How can she say he isn’t a left-wing extremist if every time she votes like one?” Landrith asks.