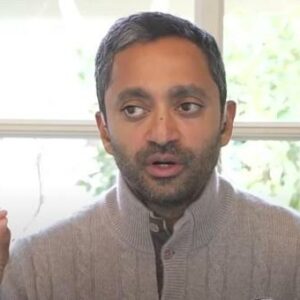 Tech billionaire Chamath Palihapitiya, in the headlines for dismissing China’s ongoing genocide against their Uyghur Muslim population as not worth caring about, is also a donor to the New Hampshire Democratic Party (NHDP).

Palihapitiya, a part-owner of the NBA’s Golden State Warriors, sparked outrage during a podcast interview last weekend by saying he didn’t care about the Communist Chinese government’s treatment of its Uyghur minority.

“Nobody cares about it. Nobody cares about what’s happening to the Uyghurs,” Palihapitiya said. “I’m telling you a very hard, ugly truth, okay? Of all the things that I care about, yes, it is below my line, okay?”

As for the NBA confronting China over human rights the way it confronted the state of Georgia over its voting reform laws, Palihapitiya said the belief that all people have basic human rights is a “luxury belief.” He also said it was “moral virtue-signaling” for a nation as flawed as the United States to call out China’s behavior.

The United Nations reports up to 1.5 million Uyghurs are in internment camps in China, many of them forced into slavery for the state. Amnesty International released a report last June detailing the regime’s mass imprisonment, torture, and persecution of Uyghur families.

Palihapitiya is reportedly worth $1.2 billion, and the NBA has a close — and very profitable — relationship with the Communist dictatorship. “I’m not even sure that China is a dictatorship,” Palihapitiya added later in the interview.

In the face of a furious backlash, the Golden State Warriors released a statement distancing themselves from Palihapitiya’s comments. But New Hampshire Democrats have not distanced themselves from the $10,000 check he sent them during the 2020 general election campaign.

The NHDP did not respond to repeated requests for comment.

In Wisconsin, where Palihapitiya wrote checks to the Democratic Party of Wisconsin and U.S. Senate candidate Alex Lasry, both announced Tuesday they are giving up the money.

According to the Milwaukee Journal Sentinel, the state party received $10,000 while Lasry got a $2,900 check.

“In keeping with our commitment to democracy and human rights at home and abroad, the Democratic Party of Wisconsin applauds the Biden administration’s leadership in confronting China’s shameful and hideous treatment of its Uyghur population, and has made a $10,000 contribution to a charity supporting Uyghurs,” the Wisconsin Democrats’ executive director Devin Remiker said in a statement.