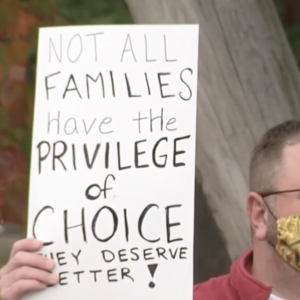 Nashua parents are questioning the seeming control the Nashua Teachers Union has over the school district’s Board of Education as frustrations over limited in-person education opportunities continue to mount.

“In my opinion, the most recent voting of the Board of Education supermajority is influenced by their campaign contributors, the Nashua Teachers Union, significantly,” said parent Alicia Houston.

Parent Allison Dyer said teachers in Nashua see it as being in their interest to continue with remote learning as opposed to in-person instruction. “The damage we are incurring now will haunt us for generations. The BOE is complicit in this, and in opposition of the students and families they were elected to represent,” Dyer said.

“I don’t think so,” Raymond said. She remembers getting a $700 contribution from a teacher when she first ran for the board and said it helped buy campaign signs for her campaign. “Campaign signs are expensive,” she added.

Raymond said while the unions that contributed to her campaign send questionnaires to candidates, they do not try to influence board policy or votes for contracts.

That’s not the account Ziehm gave this week when she voted against a new ethics policy that would ban political donations. “I feel offended when someone else tries to get inside my soul and be my conscience for me,” Ziehm said.

According to Ziehm, she lost her 2015 campaign because the union withdrew its support for her after she refused to sign an agreement to back the custodians union.

“They wanted me to sign a document that said I would not oppose the custodians in any shape or form,” Ziehm said. “What am I doing, selling my conscience to you?”

Ziehm said more than the lack of a $500 or $700 political contribution, the lack of support from union membership cost her the race. When she ran again in 2017, the union backed her and she won. She said she hasn’t changed any of her positions because of the union support.

Raymond said board members are not making decisions based on union support. She said is not sure what Ziehm was referring to about a signed agreement, but noted many unions and other organizations send questionnaires to candidates before deciding on whether or not to support that candidate.

The board had a chance this week to add political contributions to the list of banned gifts and contributions in the board’s ethics policy when board member Paula Johnson made a push to include them in a revamped policy.

“If you took money from anywhere you have to be ethical,” Johnson said.

Houston said the political clout the unions have over the board is pushing it to look out for teachers and staff, not students and families.

Houston and Dyer want to see a full return to five days a week instruction. Nashua is mostly offering remote learning with some students opting in for two half days a week in the classroom. This leaves a lot of parents unable to work.

Raymond hopes that as more teachers are able to get vaccinated in the coming week, the board can open up more schools for class. She said about half the teachers want to return to the classroom already, much like the rest of the Nashua community.

“I think the question of going back to school or not is quite emotional,” Raymond said “I’m optimistic, but I don’t have any promises for anybody.”