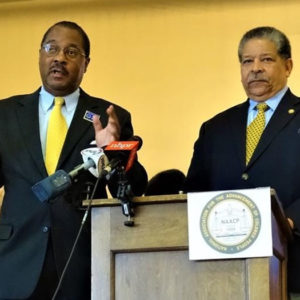 Rogers Johnson and Juan Cofield in Dover in February of 2019, working for the removal of a high school teacher who allowed students to sing an offensive song about the Ku Klux Klan. (Photo by Kimberley Haas)
News

The president of the New England Area Conference of the NAACP has ordered local chapter presidents to cease any public discussion regarding racially charged comments made by Executive Councilor Andru Volinsky related to two black men nominated for state positions.

“I am directing that you in your capacity as president of your respective branch, cease any public discussion or discussion with media regarding Andru Volinsky, Ryan Terrell or Eddie Edwards relative to any state appointment, position or job,” Juan Cofield wrote in a letter to the local chapter presidents on July 17.

When reached for comment on Monday, Cofield said, “The letter I sent speaks for itself.”

Volinsky used the term “tokenism” to describe Gov. Chris Sununu’s nomination of Ryan Terrell to the state Board of Education on June 10, and described the African-American’s nomination as “demeaning.”

Volinsky also asserted that Eddie Edwards, a Black Republican who was the director of the New Hampshire Liquor Commission Enforcement Division from 2005 to 2013, was “unqualified” to head the Office of Professional Licensure and Certification.

A member of New Hampshire’s Black Lives Matter movement spoke out regarding Volinsky’s comments. “To be clear, denying a black man from a career opportunity because you do not agree w/him is racist,” tweeted local BLM activist Erika Perez. “Black lives matter isn’t a statement of convenience. Volinsky’s microaggression had consequences and will not be forgotten.”

Volinsky later apologized for his language, though he has yet to apologize to either of the African-American nominees.

Cofield wrapped up his statements of rationale by saying, “The continued division of the three branches in this state matter has become quite public, and it is hurting the NAACP brand and the ability for us to speak and act of one mind and effect necessary changes consistent with the mission, by-laws and policies of the NAACP.”

Seacoast NAACP President Rogers Johnson told NHJournal he planned to notify his membership of Cofield’s decision during their meeting on Monday night. That branch was considering a vote asking for Volinsky’s resignation from the executive council.

Johnson said this is not about politics for him. Johnson and Cofield stood together last year in Dover and Cofield asked for the school board to reconsider its decision to allow teacher John Carver back into the classroom after he allowed high school students to sing a racially insensitive song about the Ku Klux Klan prior to Christmas break in 2018.

“This branch has really sought to fight discrimination and prejudice everywhere we have found it,” Johnson said.

Johnson said members of his chapter wanted to discuss calling for Volinsky’s resignation.

“You have to listen to your people. They asked a question and I am responsible for that,” Johnson said.

Volinsky’s gubernatorial campaign team said on Monday this is not a story that involves their candidate since it relates to the inner workings of the NAACP.

They provided NHJournal with Volinsky’s opinion piece that ran in the Concord Monitor on June 8, which outlines the five concrete steps he plans to take to combat institutional racism if he is elected governor.

They include reducing the emphasis on paramilitary training of police to shift the focus to mediation and conflict de-escalation skills; better funding for the state’s qualified health centers; fair funding for schools with large minority populations; the legalization of marijuana; and raising the minimum wage from $7.25 to $15 an hour.

Volinsky was advised not to attend the July 6 meeting of the Seacoast NAACP and did not plan to attend Monday’s meeting.

Volinsky will attend an Aug. 20 Zoom gubernatorial forum hosted by Nashua NAACP. All candidates for governor are invited.

Gloria Timmons, president of the Nashua NAACP chapter, said each candidate would be allowed an opening and closing statement where they can address the issues they consider important to the audience.

“Our members asked for it, and I agreed we should have been doing this all along,” Timmons said of the event.

Some members of the Seacoast NAACP are still disappointed with Volinsky’s actions and the decisions made by the executive council regarding Terrell and Edwards.

Ken Mendis, who is a founding member of the Racial Unity Team in Stratham and a member of the Seacoast NAACP, said on Monday that he was very impressed with Terrell’s qualifications after reviewing his information and was concerned after hearing the conversation surrounding his nomination.

“I was disappointed in that perspective because I think they should have looked at it more closely,” Mendis said. “I wish they had tabled it.”

Despite his feelings about the way Terrell and Edwards were treated, Mendis said he did not think the Seacoast NAACP should get involved by taking a vote for Volinsky’s resignation due to its status as a nonprofit organization.