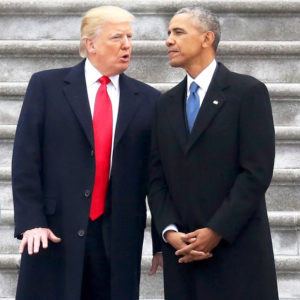 One of the most interesting findings in the new poll for NHJournal.com about the pre-midterm mood of voters in the “First In The Nation” primary state is their answer to this question:

President Trump’s other numbers in this New Hampshire poll aren’t great: He’s underwater among all voters (41 approve/54 disapprove); only 41 percent say they are very or somewhat likely to vote to re-elect him; and 40 percent of Republicans think a 2020 GOP primary challenge would be a “good thing.”

But on the economy, Trump continues to perform well. And, more to the point, better than President Obama.

Among Granite State Republicans, more than 84 percent say the economy is better today than in the Obama era. The number among independents, 40 percent, perfectly matches Trump’s approval rating among these unaffiliated voters, too.

Former President Obama’s defenders argue that the economy today isn’t significantly stronger than the end of the Obama presidency and that these comparisons are overblown. However, the rate of GDP grown declined 40 percent over Obama’s last two years in office, and he never had a year that achieved 3 percent GDP growth. It is extremely likely President Trump will hit–or surpass–that number in his second year in office.

If the GOP is able to cling to control of Congress in the midterms, it will be thanks to perceptions of the economic performance of President Trump.