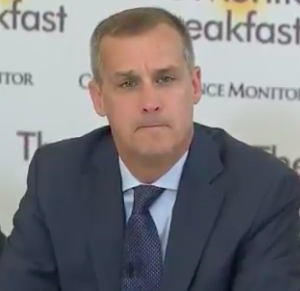 N.H.’s Corey Lewandowski Says The “One Name” Democrats Should Choose in 2020 Is…

“If I were a Democrat strategist…and somebody said to me, ‘who do you want to be the Democratic nominee for President of the United States’ there’s only one name I would choose,” Lewandowski said at a breakfast hosted by the Christian Science Monitor in Washington on Wednesday.

And I think the person could have a very competitive race…Michael Bloomberg.”

Well, the former NYC mayor is wealthier than President Trump, (in fact, he’s the 11th wealthiest person on the planet). He owns his own media empire and he’s been elected mayor of the biggest city in the U.S. –as a Republican (sort of).

However, the last person to go from serving as mayor to president was…nobody. Calvin Coolidge was the last person to have “mayor” on his resume before becoming president, but he’d been a governor and vice-president in between. In fact, according to CityMayors.com,  no big-city mayor has ever been elected President of the United States.

Bloomberg has seriously considered running in the past. According to his former media guru, Bloomberg was so close to running in 2016 that he “brought on scores of advisers and campaign staff, conducted massive amounts of polling in nearly two dozen states, opened campaign offices in Texas and North Carolina and had even shot several television ads“. (see one of Bloomberg’s unaired ads below).

Bloomberg’s biggest political push the past few years has been gun control. Despite massive spending, however, he has little to show for it.  And while he’s a wildly-successful media owner, nobody’s ever described him as a screen-grabbing celebrity ala Donald Trump.

Could Lewandowski be trolling? Could this be a “please don’t throw us in that Bloomberg briar patch” ploy? That Trump World believes Bloomberg’s money would keep more dangerous candidates from winning the nomination?

Who knows.  But anytime a guy with $50 billion decides to run for office, it’s a big deal.

Be careful what you wish for, Corey.