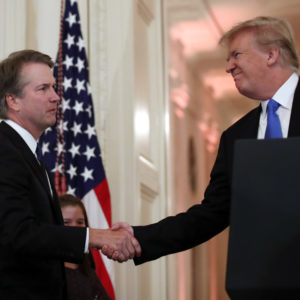 Senator Jeanne Shaheen: “The independence of the Supreme Court is critical to our democracy. Judge Kavanaugh must demonstrate his respect for precedent and his focus on defending the Constitution, independent of political influence or ideology. I look forward to reviewing his record, and to meeting with Judge Kavanaugh to discuss a number of key issues that underscore the indispensable values of equality and freedom. The Court has reaffirmed these principles in landmark decisions that maintained protections for women’s reproductive rights, LGBTQ civil liberties, and healthcare coverage for millions of Americans that depend on the Affordable Care Act. I will only support Judge Kavanaugh’s nomination if he protects the civil rights and freedoms enshrined in the Constitution.”

Senator Maggie Hassan:  “Any Supreme Court justice must be committed to a strong and independent judiciary and to protecting the rights of all Americans, not just serving corporate special interests and the powerful few. I am concerned about Judge Kavanaugh’s commitment to the rights of all Americans given President Trump’s assurance that Roe v. Wade will be overturned by his nominees to the Court, coupled with the fact that this nominee came from a list of candidates developed with groups funded by corporate special interests. In the coming days, Judge Kavanaugh must be clear about how he views the importance of legal precedent and straightforward in his answers about past cases involving women’s reproductive rights, health care, the environment, LGBTQ equality, and the civil rights of all Americans. Senator McConnell has made it clear that he will break his own precedent and bring the nominee to the floor for a vote before the election, and I will therefore thoroughly review Judge Kavanaugh’s record and responses throughout the nomination process.”

Planned Parenthood NH Action Fund:  “Tonight President Trump nominated anti-abortion judge, Brett Kavanaugh, to fill the United States Supreme Court seat vacated by Justice Anthony Kennedy. With this dangerous nominee, Donald Trump has adhered to his campaign promise that he would only put forward extreme nominees who would vote to overturn Roe v. Wade, the historic case that legalized abortion in the United States, and strike down the Affordable Care Act. With Trump’s pick of Judge Kavanaugh, the right to access abortion safely and legally in this country is on the line.”