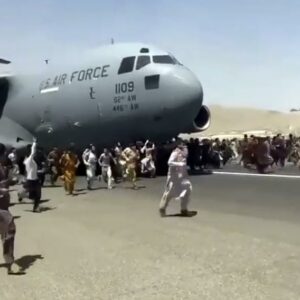 We’re only halfway through Joe Biden’s painful first term, and these months have not been easy. As Americans, we never give up hope, but it’s tough to see empty formula shelves and home heating bills coming up that we can’t afford. Joe Biden and the Democrats’ weak “America Last” policies are singularly responsible for this string of defeats, and nowhere was this failed strategy more evident than last year’s devastating withdrawal from Afghanistan.

We can all vividly remember the horrifying scenes playing out before our eyes of planes leaving Americans – and desperate Afghans quite literally clinging to freedom – abandoning the country to the Taliban. We know that the irreplaceable loss for the 13 new Gold Star families feels like yesterday – and not one year ago. We remember the pain of defeat.

It’s a stark difference from how we operated under President Donald Trump and an America First agenda that defined our approach to governing. I saw this working firsthand as the Senior White House Advisor in President Trump’s State Department. There were plenty of D.C. “lifers” in the bureaucracy of the Swamp looking to thwart the president’s agenda, but we had a mission that was simple and clear. As a result, the rest of the world respected us, and we had the cooperation of other countries in securing our southern border and keeping energy costs low.

Fast forward to one year ago, and Joe Biden wasn’t leading; in fact, he was on vacation when all hell broke loose in a place that had seen an incalculable investment of American lives and treasure over two decades. Despite repeated claims from his administration that the withdrawal would be “safe,” “orderly,” and efficient, we saw American lives lost, billions of dollars in equipment left behind, our embassy abandoned, and American citizens, as well as many of our Afghan allies, left at the mercy of terrorists.

This terrible moment for our country perfectly illustrates the problem with a pathetic “caretaker” as president and one-party rule in Congress that does not hold him to account.

Leading up to our shameful exit from Afghanistan, the president’s cronies in the media and Congress simply accepted assurances from Defense Secretary Lloyd Austin, Secretary of State Antony Blinken, and National Security Advisor Jake Sullivan that everything was proceeding according to plan. Nobody questioned how abruptly upending the Trump administration’s plan might create uncertainty and instability, giving our adversaries an opening. And why should anyone in the Biden White House have thought differently? After all, they had successfully avoided similar scrutiny for decisions earlier that year that ended the “Remain in Mexico” policy, creating a humanitarian disaster at the Southern Border, and devastated the country’s domestic oil production, leaving us all paying higher prices at the pump.

Unfortunately, despite the shocking incompetence on display just one year ago that rightfully rattled us all, Democrats in Washington have gone back to running cover for an Administration that has simply lost touch with reality. Instead of addressing the economic pressures hurting American families, they tried to change the definition of “recession.” Rather than admit that the decision to kill the Keystone XL Pipeline was shortsighted and wrong, Democrats turned a blind eye as Biden went overseas to beg for more foreign oil from dictators and thugs. And, most recently, Democrats couldn’t own up to the fact that their endless socialist spending has created record inflation, so they had the gall to pass even more spending under the absurdly named “Inflation Reduction Act.”

This November, we need to send the Biden administration a message. We will make it clear that with a Republican majority in Congress, the Democrat’s “America Last” agenda is dead upon arrival. We will restore our conservative voice in Washington and put America First again.

Matt Mowers is a Republican candidate for New Hampshire's First Congressional District. He wrote this for NHJournal.com.