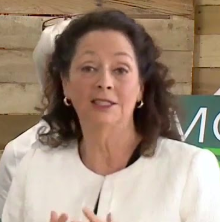 Kelly told the Valley News that she “supports the state using less natural gas,” however she simultaneously refused to take a position on the Granite Bridge pipeline or any other similar projects.

“You need to really give a lot of thought, understanding, research to these issues before you just jump and make a decision,” Kelly said.

Environmental activists like the EchoACTION organization have criticized Kelly for her less-than-transparent views on environmental issues, posting an embarrassing video of the candidate evading repeated questions from green activists about her positions on natural gas, fracking, or taking funding from contributors in the fossil fuel industries.

These activists are unlikely to be pleased with Kelly’s campaign performance yesterday. As the Valley News reported:

“Kelly declined on Tuesday to issue an in-depth energy policy, saying her positions are known to New Hampshire voters.”

That is clearly not the case.  Her primary opponent, Steve Marchand,  has taken a very clear and aggressive approach on energy policy, opposing the Granite Bridge pipeline, ratepayer subsidies for renewable energy projects, and a mandate that half of all electricity consumed in New Hampshire be generated by renewable resources.

“We need to be diversifying and localizing our (energy) sources, not doubling down on natural gas,” Marchand said. “Natural gas moves us away from the clean energy future that we need to pursue.”

Given that electricity from solar/wind/biomass costs about twice as much as electricity generated by natural gas, Marchand’s approach would put significant price pressure on the already-high cost of electricity in New Hampshire. Marchand believes that, despite New Hampshire residents paying the fourth-highest electricity rates in the continental U.S., green-energy mandates and blocking access to cheaper natural gas are winning issues.

Does Molly Kelly see the political danger of that position in a general election? Or has she simply not thought through her energy policy?  Either way, Democratic primary voters are still waiting for answers.