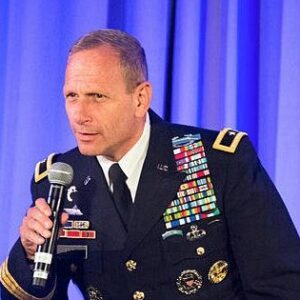 General George S. Patton always seemed to be in hot water. While historians and biographers have extensively documented the flamboyant soldier’s troubles and triumphs, the 1970 Oscar-winning film “Patton” ensured eternal iconic status for the controversial warrior. The film’s lasting popularity perhaps reflects a desire to see assertive leadership during desperate times. When action is needed people look for heroic figures to stand up and take charge without worrying about hot water.

But films like “Patton” can also reinforce stereotypes, especially among those who’ve never served in the military. Many such folks seem to see generals as autocratic warmongers—an inaccurate stereotype largely influenced by popular media. The Buck Turgidson character in “Dr. Strangelove” was a comical but scary general who wanted nuclear war. Turgidson was played by George C. Scott, who also played the title role in “Patton.”

So generals can make some folks nervous—which is unfair and unfortunate. Our population’s percentage of veterans is declining, headed to its lowest level in many decades. Only 91 members of Congress are vets. In 1973 390 lawmakers had worn our country’s uniform—almost 75 percent of Congress. But because so many people today don’t understand the military culture, assumptions and stereotypes abound.

The truth is that to become a general one needs numerous essential and desirable qualities such as intelligence, stamina, decisiveness, integrity, courage, loyalty, and enthusiasm. Only great people become generals.

Generals are in the news in New Hampshire because retired Brigadier General Don Bolduc won the Republican U.S. Senate nomination on Sept. 13. And when some people look at Bolduc, they see Buck Turgidson when they should be seeing George Washington or Dwight Eisenhower—two generals who became U.S. presidents. Indeed, 13 generals went on to be president, including New Hampshire’s Franklin Pierce.

Bolduc has seven weeks to overcome the autocratic stereotype that too many non-veterans apply to flag officers. The truth is that no one becomes a general in modern America without displaying noteworthy interpersonal and political skills. Washington’s flaws have received much attention over time, but he was the one indispensable person who singlehandedly kept the Continental Army together for seven long years until independence was achieved. And without his support, we’d have never ratified a constitution to become the United States.

So rest assured that Bolduc similarly has formidable interpersonal skills. One doesn’t successfully navigate around the Pentagon without political savvy. And Bolduc has far more diplomatic experience than the incumbent, Maggie Hassan. As a senior officer, Bolduc’s traveled the globe and met with numerous world leaders.

Like all of us, Bolduc’s made statements that in hindsight he’d probably say differently or not at all. The Democrat smear machine will highlight such statements ad nauseum during the next seven weeks. But Dems should expect plenty of blowback when they go low against a man of such character and heroism.

And the Dem attacks will be somewhat ironic, given that Democrats invested heavily to essentially pick the GOP’s three federal candidates. Not only did they spend vast sums to promote the candidates they felt were weaker, but many Dems (erstwhile “undeclareds”) actually voted for Bolduc. Before they’ll vote against him. Channeling their inner John Kerrys, so to speak.

Do these sordid, Machiavellian tactics set good examples for our young people? Should such behavior be rewarded?

The political establishment should not underestimate the appeal of a straight-talking man of character like Don Bolduc, for whom public service meant going into harm’s way in Afghanistan not once but 10 times, as opposed to going to Washington as a career politician and becoming a multi-millionaire.

The unfortunate tactics that Bolduc’s opponents have used and intend to use will cause many Granite Staters to desire figurative showers to cleanse themselves. On November 8, Bolduc will offer such folks figurative soap and scrub brushes.

And hot water too!