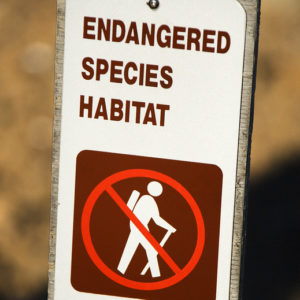 “What’s wrong with a little optimism?”

Which explains their new revised rules for the 1973 Endangered Species Act (ESA). Stories of ridiculous regulatory overreach under the current ESA are legion, from pedestrian tunnels built for an (allegedly) endangered mouse in Colorado to stopping construction of a $15 million overpass to accommodate a single spider.

As a result of overly-expansive impacts, the ESA is costing Americans billions of dollars a year in economic development and compliance costs. The Trump administration believes that a few minor tweaks can prevent some of the worst government excesses while still protecting truly endangered species.

“The best way to uphold the Endangered Species Act is to do everything we can to ensure it remains effective in achieving its ultimate goal—recovery of our rarest species. The Act’s effectiveness rests on clear, consistent and efficient implementation,” Interior Secretary David Bernhardt said in a statement.

“The revisions finalized with this rulemaking fit squarely within the President’s mandate of easing the regulatory burden on the American public, without sacrificing our species’ protection and recovery goals,” added U.S. Secretary of Commerce Wilbur Ross. “These changes were subject to a robust, transparent public process, during which we received significant public input that helped us finalize these rules.”

Not surprisingly, the reaction from Trump’s opponents was swift and severe.

One NBC affiliate in Miami simply went with the headline “I’m Scared,” uncritically quoting a “wildlife expert” from the local zoo.

Turns out, there’s nothing to be afraid of.

The truth is that with the ESA on the books for nearly half a century, the government agencies that enforce it have decades of scientific evidence at their disposal to evaluate how successful the act has been in its stated goal of “safeguarding, for the benefit of all citizens, the Nation’s heritage in fish, wildlife, and plants.”

And while the act boasts some success stories, with less than a 2 percent rate of recovering and delisting endangered species, there’s plenty of room for improvement. One of the most significant changes is the removal of the so-called “blanket rule,” actually restores the intent of the original law from regulatory changes made in 1978 that erased any meaningful distinction between “endangered” and “threatened” species under the law.

While having a “blanket rule” in place to treat all threatened species as endangered by default and prohibit their take (meaning their harm, hunting or capture) under any circumstances might seem beneficial, the data increasingly shows that it has been counterproductive to actually recovering threatened species. With 90 percent of endangered species on private rather than federal land, it is critical that the law creates positive incentives for landowners to preserve habitat, which often includes allowing some take under limited circumstances.

One 1998 study identified the perverse incentives to landowners to quietly destroy habitat as the “shoot, shovel, and shut up” strategy. This research confirmed previous studies that this practice is “‘one reason why so many species are teetering on the very brink of extinction.”

As a result, multiple presidential administrations have had to carve out numerous species-specific 4(d) exceptions to the “blanket rule” in order to best preserve species on a case-by-case basis. The Trump administration’s new rule simply codifies the existing practice and aligns the Fish and Wildlife Service with the processes of other federal departments.

In another change opposed by environmental activists, the new reforms will allow federal agencies to determine the economic impact of listing species as endangered and make the data available to the public in the interest of transparency, “as long as doing so does not influence the listing determination.” The reaction from the press has been a flurry of erroneous reports that the Trump administration was using economic considerations to decide whether to protect a species or not.  NPR, for example, was forced to run a correction after their initial reporting acknowledging they had misrepresented the reforms.

In a different political environment, it’s possible that these measured reforms to the ESA against a backdrop of billions in lost wealth and property values would enjoy bipartisan support The act that multiple administrations have had to issue waivers shows that the problem is real.

Unfortunately, in the era of Trump, nothing is more endangered than bipartisanship.