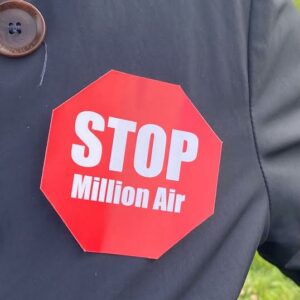 As Seacoast residents raise the alarm about the proposed 90,000-gallon jet fuel storage being built at Pease International Tradeport by private air company Million Air, the company is pushing back.

“Million Air is proposing new tanks with state-of-the-art leak detection, prevention, and containment systems designed to meet or exceed current best practices,” said Peter Bragdon, a spokesman for the Houston-based company. “As long as planes are flying in and out of Pease, fuel will be needed for those planes. Doesn’t it make sense to have the most modern, up-to-date systems available?”

Concerned residents and environmental activists held a press conference last week to protest the fuel tanks, which they said will be located too close to wetlands that feed into the local drinking water supply.

“What’s concerning is how all this is being handled. For example, Million Air’s site development plans underestimate the wetlands impact of this project, ignore the previous contamination that still exists, and the plan places fuel storage within feet of these sensitive wetlands,” said Seacoast resident Dania Seiglie.

The fuel tanks that make up Million Air’s proposed fuel farm would be about 100 feet away from the wetlands in question. Million Air COO Chuck Suma said the residents’ concerns about the fuel farm are misplaced.

“We know how to manage a fuel farm and we know how to do this in an environmentally friendly way,” Suma said. “I would never allow or sanction or run my facilities in such a way that would negatively impact the area around it.”

Critics argue that even if the fuel farm isn’t technically in the wetlands area — a claim they dispute — even Million Air admits it wants to build a roadway through it. Worse, the area is still dealing with drinking water contaminated with PFAS chemicals left over from the U.S. Air Force base that used to be located at Pease.

“Much like PFAS and previous water contamination concerns, this is a priority for local residents worried about clean water because it’s all connected,” Seiglie said. “This site mid-Pease connects directly to North Mill Pond by Hodgson’s Brook and from here, contamination can easily reach the Piscataqua.”

PFAS chemicals are linked to certain types of cancer, birth defects, and other serious health issues. The man-made chemicals are found in oils, jet fuels, industrial degreasers, and firefighting foam, among other uses. PFAS contamination has been found in the Seacoast region, as well as in communities like Merrimack, Bedford, and Litchfield stemming from the Saint-Gobain manufacturing plant in Merrimack. There is also a PFAS problem in the communities near the Coakley Landfill in North Hampton.

The chemicals have an unusually long half-life and can stay in the human body for decades after exposure.

Bragdon said the company’s plans are environmentally sound. Plans for the driveway have won the New Hampshire Department of Environmental Safety’s approval.

“The only wetland issue involving the Million Air proposal has to do with a driveway that will be needed so customers can access the site from the public streets – dropping off and picking up clients, for instance,” Bragdon said. “Million Air has worked diligently to minimize wetland issues with the driveway, for instance by moving the driveway as far north as possible to avoid wetland impacts.”

The plans are not safe enough for the concerned residents and activists, however. State Rep. Debra Altschiller (D-Stratham) wants the company to change the plans to move its proposed site farther away from the sensitive area, which she said is doable for the business.

“Everyone here knows there is actually another completely appropriate and equally sized piece of property less than a mile from the proposed project space and that land doesn’t need to have a road built through a wetland to roll trucks over,” Altschiller said. “There is an alternative that doesn’t even need variances to operate next to precious water resources. It is available and ready to be developed.”

Million Air is building a fixed-base operations center at Pease that will include a 12,000-square-foot hangar. Bragdon said the company is working with DES and all the relevant agencies to make sure its project is done correctly and safely.

Suma said the company will employ about 30 people full-time. Million Air’s FBO will attract businesses to the region and bring more money to the Seacoast.

“We’re going to be changing the demographics coming in and out of the airport,” Suma said. “There are opportunities there and we want to be a good partner with the community and the (Pease Development Authority) board.”

Seiglie, however, questioned the company’s push to get the FBO up and running, saying it is moving faster than normal to avoid public scrutiny.

“This company has done this elsewhere, getting permissions without public scrutiny or knowledge – including places like New York where there are major environmental concerns and the project was pitched without proper review. So, we are worried,” Seiglie said.

Million Air is currently involved in a federal lawsuit with Westchester County, N.Y. over the company’s project at the Harrisville, N.Y. airport.

Pease already has an FBO operated by Port City Air, and Port City’s company attorney, Dan Hoefle, is joining the chorus of the opposition. He said Port City was never properly informed about Million Air’s proposal, despite Port City being an abutter to the project. Hoefle said the site Million Air is using is not suitable for the project.

“Port City is well aware of this plot of land in question. We would never develop on this particular parcel of land for the very reasons cited,” Hoefle said.

Bragdon and Suma blame Port City for ginning up the opposition to Million Air’s plans and trying to get the competitor’s plans delayed.

“Port City is self-serving and stirring this up,” Suma said.

Suma accused Port City of trying to hold on to its monopoly at the airfield by delaying Million Air’s plans. Suma said he’d not worried about the competition, likening the two companies to Motel 6 versus the Four Seasons. Right now, the Motel 6 FBO, Port City, is scrambling to hold on to the business, Suma said.

“This is all stuff being thrown in the air by Port City Air. They have a monopoly on the airport, and you have a Motel 6 driving what can be done at the airport,” Suma said.

Port City already has fuel storage tanks close to where Million Air plans to put its tanks, Suma said, and those tanks are old and present a danger to the wetlands. The area around Pease is also dotted with gas stations and heating oil companies, which seem to be escaping the ire of the residents concerned about drinking water, Suma said.

“If the community is concerned, they should be looking at Port City fuel farms and the gas stations and heating oil facilities nearby,” Suma said.

Hoefle said Port City’s fuel farm is safe and meets all current standards. He said the company will continue to work with state and federal regulators to make sure the tanks stay in compliance.

“Port City Air’s tanks are regularly maintained, they are in fine shape,” Hoefle said. “They will continually be maintained and regulated.”

Hoefle said Port City has no problem with Million Air bringing an FBO to Pease, just not in the location they have picked.

“We don’t have any problem with competition, but this isn’t the site for it,” Hoefle said.