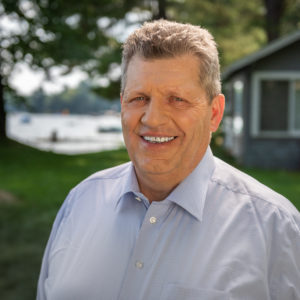 Bryant “Corky” Messner knows the number one topic of conversation in the political world is Donald Trump. But he tells NHJournal he’s turning his attention to someone else:

“I am focused on beating Jeanne Shaheen,” Messner said on Wednesday, hours after formally announcing his candidacy with the now-obligatory video release.  “She’s a career politician who hides in the fog of Washington DC, and she has broken faith with the voters of New Hampshire.  She’s following the Democrats march to the left and she does whatever [Senate Minority Leader] Chuck Schumer tells her to.”

Independent analysis of Shaheen’s voting record finds she’s one of the least bipartisan Senators–ranking behind hardcore libertarian Ron Paul (R-Ky.) and progressive activist Sherrod Brown (D-Ohio), and she has a lifetime rating of 89.7 from ProgressivePunch.org, putting her to the left of Dianne Feinstein (D-Calif.) and Hillary Clinton running mate Tim Kaine (D-Va.).

Messner, 62, is a founding partner and chief executive officer of Messner Reeves LLP, a Colorado-based law firm with nine offices and more than 100 attorneys and he is expected to largely self-fund his campaign. The New Hampshire Democratic Party wasted no time attacking, releasing a statement dismissing Messner’s candidacy as a “Trump-like vanity project.”

“Right after Corey Lewandowski declared that he wanted to clear the Republican primary field, a self-funding millionaire joins the race, promising to spend millions on his Trump-like vanity project of a campaign.

“This is a nasty GOP primary between candidates united in their devotion to Trump and set on ending health care for thousands of Granite Staters, taking away a woman’s right to choose, and undoing critical protections for our air and water, and it’s only getting worse as more candidates join the field.”

Messner responds to the class-warfare question by talking about his blue-collar roots growing up in Altoona, PA (“My dad fixed cars for a living”) and his military service as a West Point grad and Army Ranger. “I’m not going to apologize for being successful,” Messner says.  “I am in this race for one reason and one reason only: to do the right thing for the people of New Hampshire. I don’t need to create wealth [for myself] by going to the U.S. Senate, like Jeanne Shaheen did.”

Messner is the third Republican to enter the September 2020 primary, behind former NH House Speaker Bill O’Brien and retired Brig. Gen. Don Bolduc.  And while he may want to focus on beating Jeanne Shaheen, most political observers believe the race will center almost entirely on Republican support for the president and who can win the “Trump primary.”  Why should Republicans who want to show their support for President Trump vote for Messner, as opposed to, say, the president’s former campaign manager Lewandowski who, sources tell NHJournal, is all-but-certain to enter the race?

“I am focused on supporting President Trump’s policies which, in my view are working,” Messner told NHJournal “I look at it as policy over personality. In my business career, I’ve dealt with New Yorkers a lot. And Donald Trump is a New Yorker.

Thus far in the Trump era, GOP primary voters have shown more support for the “completely agree with Trump” Republican candidates than the “respectfully disagree” kind, but the primary is still a year away. Attitudes may change.

“I’m in this race to do the right thing and for no other reason,” Messner says. “And I believe the voters of New Hampshire will embrace that message.”