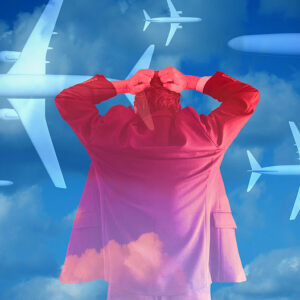 AirTravel industry crisis and flight delays or trip cancelation at the airport as an avation business traveler or tourist headache problem for airline and tourism with 3D illustration elements.
[IS] Opinions

KING: Meet the New ‘Unacceptable Face of Capitalism’: the Airlines

A Conservative British prime minister, Edward Heath, coined the phrase “the unacceptable face of capitalism” in 1973. He was describing the actions of Roland Walter “Tiny” Rowland and the company he headed, Lonrho (London Rhodesia), a mining and real estate conglomerate with interests across Africa.

Having had a hectic travel schedule since the end of the COVID-19 lockdown, the airlines have become an unacceptable face of capitalism.

I refer to the airlines collectively because, from the traveling public’s point of view, they are a massive whole with little to choose between them. Nominally in competition, their attitude to the public has become a common one of disrespect.

That one of the airlines, Southwest, would implode when stressed was no surprise. A metamorphosis had taken place in the last two years with the passengers — the customers — becoming, in the collective airline psyche, just economic opportunities ripe for endless upselling.

When the airlines realized they could extract money over and above the ticket price, they began a service free fall and abandoned any pretense of respect for their customers — or, apparently, themselves. They, the customers, had become economic targets for exploitation.

First came the baggage charges. Surely, the airlines knew people didn’t travel without bags and could have allowed for that in ticket pricing.

Then they found they could upsell the seating, making passengers pay extra for marginally better seats and even for boarding about five minutes early.

On a recent flight in a Boeing 767, the airline was charging a stiff premium to sit in the double seats near the window rather than in the three abreast in the middle. My wife and I stayed in the middle.

A new class of service called “basic economy” has prohibited carry-ons in the overhead bins, forcing passengers to pay for checked baggage and wiping out some of their flight cost savings.

I have flown around the globe for decades and have known every class of service, from that on the Concorde to the wonders of first class on Asian air carriers. But mostly, I have sat in the back and watched as the aircraft have gotten older and shabbier, as the seating area has shrunken, as the lavatories have shrunken in number and size, as the snacks and food offerings are as incomprehensible as they are inedible, and as the flexibility of tickets has disappeared.

In tandem with these deteriorations in comfort, service and pricing has come the cancellation of normal business practices when it comes to cash and credit cards. You can no longer buy a ticket with cash at the airport. You can’t use a credit card on board for a snack if you haven’t pre-registered your credit card and, in many cases, you must have your own device to watch entertainment.

For a fee, of course, you can now get Wi-Fi on many airlines. But the seats are so positioned that you can’t, in my experience, open a laptop and work. For another fee, they may have a fix.

As I have strapped into a sometimes-broken seat (which reclines about 2 inches), looking at the ashtray (which indicates the age of the cabin furnishings), I have begun to wonder to what extent this predatory approach to passengers, this total indifference to those who pay the stiff fares and all the fees on top, has filtered down to the maintenance department.

Passengers are inured to the horrors of airline travel and the victimhood that goes with it. Know this: If you are trying to travel by air, you have identified yourself as an economic target for a group of companies, the airlines, which supposedly compete but which, within hours, match every new fee dreamed up by one of their supposed competitors.

The latest and most serious inequity is the defrauding of passengers by reducing the value of their frequent-flyer miles.

Transportation Secretary Pete Buttigieg needs to take a root-and-branch look at the airlines: the greed, the collusion and the manifest disrespect for the passengers that is pervasive. Notably, he needs to look at seat size and aisle width and their effect on safety.

I have a full flying schedule in January, and I am preparing for my time in the gouging skies with trepidation and resignation.