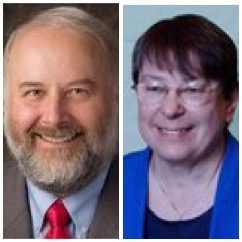 New Hampshire has thousands of current and former state legislators of all stripes, but few are as intriguing as Carol and Dan McGuire.

The couple, both graduates of the Massachusetts Institute of Technology, are retired engineers who have been married for 36 years. Originally from Vancouver, Washington, (a suburb of Portland, Oregon), the McGuires moved to New Hampshire in 2005 as participants of the Free State Project (FSP).

The McGuires were apolitical much of their lives and later developed an interest in politics and discovered FSP. This curiosity arose during the summer of 2004 as they read political columns, including those by Walter Williams, which mentioned FSP. The McGuires visited Porcfest, an annual FSP summer gathering in New Hampshire, prior to signing up for the move. One year later, the McGuires traveled over 3,000 miles to settle in Epsom.

The McGuires say they have received minimal backlash for being Free Staters. They remind critics they have lived in New Hampshire longer than they have anywhere else. They even took it upon themselves to join the Granite State Ambassadors when they first arrived. The organization populates welcome centers across the state and provided them with an understanding of New Hampshire state history

“There’s an old phrase, ‘there are two kinds of people in New Hampshire: the lucky and the smart,'” Dan said. “The ones who were born here are lucky and those who moved here are smart, so you don’t have to apologize for being smart.”

In 2008, local Republicans approached the McGuires about running to complete their ballot slate for the General Court. In their first run for office, Carol was elected in third place while Dan finished in fifth. He found better luck in 2010, when he was elected alongside Carol.

Dan stepped down after his latest term ended in 2016, saying “enough is enough” and that he was unlikely to run for office again. He said he fulfilled his duty of public service, as had those who served in the same seat prior to him and those who will follow in the future.

Carol is a consistent force in the legislature, advocating for issues close to her whether they are on the front-page or under-the-radar.

Carol ran for House Speaker in January against incumbent Shawn Jasper, R-Hudson, and challenger Laurie Sanborn, R-Bedford. Despite her self-admitted introversion, Carol said it needed to be done to address issues within the Republican caucus, which left policy goals unaccomplished due to disorganization and infighting.

She said she thought she’d excel at the position given her history of assuming leadership roles. Carol was the first female leader of the fraternity she and Dan joined at MIT, a foreman at General Electric, and a production manager at Lockheed Martin.

Jasper and Sanborn, however, got ahead of her in coalescing support for their respective campaigns. Carol eventually supported Sanborn after realizing she would not win, saying Sanborn would be a more effective speaker than Jasper. She says she has been contacted about running again but isn’t sure she wants the position.

Her goals for 2018 focus on keeping the state retirement system operating and a potential appointment by Gov. Chris Sununu to a committee tasked with reviewing a reduction in administrative rules. Carol currently serves as vice chair of the Joint Legislative Committee on Administrative Rules, which oversees the legislative rule-making process.

Outside Approach to Legislating

Being outsiders to politics has worked as an advantage for the McGuires while serving in Concord.

Carol said her engineering background helped her write proposals for legislative initiatives and keep herself organized in the state house. Dan served on the finance committee, which gave him the opportunity to work with estimates and statistics to fully evaluate proposals before the state government.

They shared a few legislative insights they’ve gathered after years in the state house.

Carol said legislators need to build support on every issue they engage on, including with people who they may disagree with on certain topics. According to Carol, this is especially effective for work on detail-driven issues like the extension of scholarship donation periods rather than headline social issues like abortion.

Dan said the New Hampshire state legislature is the most effective in the country due to its large size and composition of volunteer legislators. He said this ensures a committed workforce will tackle difficult issues facing the Granite State from a variety of perspectives.

They both said the lack of legislative pay increases turnover while decreasing the potential for corruption. Serving as retirees was another boost as it helps legislators focus more of their time addressing issues during session. Some retired legislators spend up to three days a week in Concord. According to the McGuires, those who have full-time jobs in addition to legislative work are typically assigned to any of the committees are set up for a less demanding schedule.

Beyond the Political Arena

Outside of their political work, the McGuires keep themselves busy.

Carol serves on the advisory board for Children’s Scholarship Fund. She and Dan also work as angel investors for startup companies in the state and throughout New England. They provide seed money to startups in industries ranging from software, chemical, medical, and physical technology.

Dan said the ideas do not come to fruition but the investment is about understanding the technology and seeing if it pays off. One of their most successful investments was in a low-technology startup: Murphy’s Taproom, which now has locations in both Manchester and Bedford.

Dan said one of the most interesting investments was in a bio-technology company which genetically engineers fish food to reduce the cost of fish. According to Dan, the company creates a single-celled organism to eat ethanol and mirror the amino acids which fish consume when eating ground up anchovies.

The McGuires also continue to assist in moving parties for those FSP participants trekking to New Hampshire like they did more than a decade ago. They said the social networking aspect of FSP provided them with a number of friends in the Granite State which they are grateful for. Dan said there is an adjustment period after the move but after seeing the same people around at the grocery store or at FSP events, New Hampshire began to feel like home.

The McGuires also happen to be two of the top bridge players in New Hampshire. Dan and his partner Wayne Burt won their second state championship this year and have finished as finalists every year since 2013.

Dan has played bridge since his grandparents introduced it to him as a child. Carol learned to play in high school and has competed since her days at MIT.

They both agree the game sparks conversations and friendships through the casual contests and tournaments where they compete. Players don’t have to be experts to enjoy it, which allows beginners to compete in a social, fast-paced game. The McGuires often seek out organized bridge games while on vacation, including during international travels.

“It’s more social than chess, you always play with a partner and sometimes you play on teams,” Dan said. “With chess, you play by yourself and a chess match is hours-long whereas a bridge hand is five minutes long. You move and meet more people and play more hands. It’s more satisfying that way.”