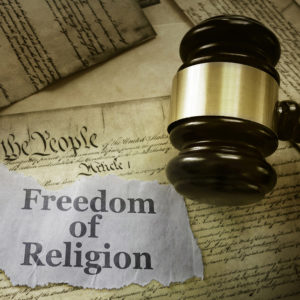 McGINLEY: Supreme Court Lands on Side of Religious Liberty in Latest Decisions

The Supreme Court handed down two decisions on July 8 supporting employers’ religious exercise that should encourage lovers of the First Amendment in New Hampshire, and across the nation.

Does the federal government get to decide which teachers belong in a religious school classroom? No. In Our Lady of Guadalupe School v. Morrissey-Berru, the court ruled decisively that religiously affiliated schools cannot be told by the government which teachers should be hired and fired.

The decision stemmed from two separate lawsuits brought by teachers whose contracts were not renewed by parochial schools in the Archdiocese of Los Angeles who alleged their termination of employment was due to disability or age discrimination. (Read the related Amicus Brief filed by the Department of Justice.)

On a 7-2 vote, the court affirmed that employment law could not be used to force a religiously affiliated school to re-hire teachers whose contracts had not been renewed.

Federal law as interpreted by the court already includes a “ministerial exception” to employment law, acknowledging that religious communities may not be told who to employ. In Our Lady of Guadalupe, the court majority declined to impose a rigid test of who qualifies as a “minister,” instead deferring to the religious institution.

Justice Alito penned the decision, concluding that the First Amendment protects schools from these discrimination claims:

“The religious education and formation of students is the very reason for the existence of most private religious schools, and therefore the selection and supervision of the teachers upon whom the schools rely to do this work lie at the core of their mission…. Judicial review of the way in which religious schools discharge those responsibilities would undermine the independence of religious institutions in a way that the First Amendment does not tolerate.”

For the record, Justice Alito was joined by Chief Justice John Roberts and justices Thomas, Breyer, Kagan, Gorsuch and Kavanaugh in deciding in favor of the schools. Justices Sotomayor and Ginsberg dissented.

In the second case, the justices tackled the question “Can religious objectors be lawfully exempt from the regulatory requirement to provide health plans that include contraceptive coverage?” Yes.

In Little Sisters of the Poor v. Pennsylvania, the court divided along the same 7-2 line in ruling that an order of Catholic nuns could not be compelled to provide employees with insurance coverage for contraception and early abortion drugs.

The Little Sisters, who had obtained previous federal relief from providing insurance that covered contraception and abortion medications in violation of their religious beliefs, faced a targeted lawsuit from the state of Pennsylvania to remove that exemption.

Not a single impacted person was named in the suit, nor had Pennsylvania challenged other, broader exemptions under the Affordable Care Act. Still, the state sought to compel the courts to enforce compliance with the federal mandate (Pennsylvania has no state level mandate) or subject the Little Sisters to tens of millions dollars in punitive fines.

Had Pennsylvania prevailed, the Little Sisters of the Poor, a ministry dedicated to caring for the poor and elderly, would have been facing financial ruin for following their religious beliefs. The Supreme Court made the right decision by affirming that federal agencies, in the pursuit of their own interests, can’t force religious people or institutions to abandon their beliefs.

Getting to the Supreme Court is a long and expensive process, and the results are unpredictable.

In these two cases, the Court has affirmed religious freedom and the First Amendment for institutions at the state level.

The impact for New Hampshire remains to be seen, but our many fine religious schools and organizations should be breathing a sigh of relief that the government has taken a few steps back from interference with conscience rights and doing what’s right.