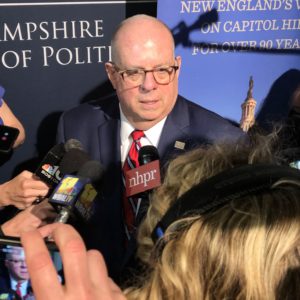 MD Gov. Larry Hogan speaks to the press at the New Hampshire Institute of Politics at St. Anselm College on April 23, 2019
News

Maryland Gov. Larry Hogan said President Joe Biden’s plan to spend up to $1 trillion on a college debt bailout is “completely over the line.” He called it a violation of the U.S. Constitution.

“It’s a completely wrong policy that’s going to be disastrous. I also think he overstepped his authority and that Congress ought to limit him,” Hogan said.

“Shifting the burden to the taxpayers for folks who got the advantage of going to college so they don’t have to pay it back — and the taxpayers who were working hard that maybe didn’t have that opportunity have to pay for it? It, it’s crazy. And to put that kind of money out there when we’re faced with inflationary problems and a potential recession, that’s just a bad idea.”

Though he has repeatedly said he is focused on his final months in office and won’t make any decisions until next year, the Maryland Republican has made no secret of his interest in a 2024 presidential run. Hogan is scheduled to speak at a Politics and Eggs breakfast Thursday morning hosted by the New England Council and the New Hampshire Institute of Politics. It is an all-but-mandatory stop on New Hampshire’s First in the Nation primary trail. He has also written high-profile op-eds for national news outlets like The Wall Street Journal.

And last week, Hogan reportedly gathered about 50 supporters at a hotel in Annapolis to discuss his potential path to the GOP presidential nomination.

“According to people who attended Thursday’s meeting, Hogan operatives laid out what they see as the governor’s potential trajectory in 2024, and asserted that President Trump’s stranglehold on the GOP is diminishing, due to his legal entanglements, electoral failures, and waning influence overall,” a Maryland news site reported.

In a podcast interview with NHJournal on Wednesday, Hogan touted his record as a Republican governor of “the bluest state in America.” He talked about getting a Democrat-controlled legislature to cut taxes as well as his handling of riots in Baltimore in response to the death of Freddie Gray while in police custody. Then, after just 89 days in office, came the diagnosis that he had stage-three non-Hodgkin lymphoma, a very aggressive cancer.

Hogan has been cancer-free since 2016. Asked what he learned from the months of chemotherapy and the challenges that came with it Hogan said, “You have to be prepared for things that hit you out of the blue.”

“We had great plans about the things we wanted to accomplish, and we were doing a good job of kind of following our plan,” Hogan said. “Then came the challenge of aggressive cancer. But I worked right through it. And I think the people of our state appreciated that we never quit.”

If Hogan chooses to run, he could be part of a crowded field. One theory is that if former President Donald Trump chooses to run, many viable candidates will remain on the sidelines. Hogan has indicated his decision will not be determined by Trump’s actions. If Trump doesn’t run, a litany of candidates is likely to enter the GOP primary, including Hogan’s neighbor, Virginia Gov. Glenn Youngkin.

One issue that helped Youngkin win in Virginia — and catapult onto the list of potential presidential contenders — is parental rights. Hogan said he believes the issue is a winner for Republicans, and stories like the Manchester N.H. school district denying parents basic information about their children’s behavior help make the GOP’s case.

“Many politicians in America are attacking the rights of parents and propping up the power of teacher’s unions,” Hogan said. “Education starts at home and parents have a right to know what is happening at school and what their children are being taught and what’s going on with their kids.

“I think this is a big issue that the country, the parents across the country, are pushing back and getting more involved in their child’s education.”