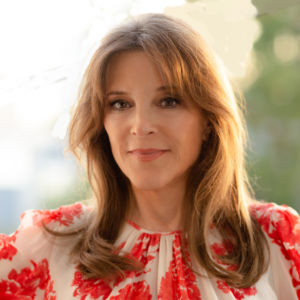 Democratic presidential hopeful Marianne Williamson is a candidate on a mission. Literally.

In a wide-ranging interview with New Hampshire Journal, the best-selling author and “Oprah-blessed spirituality superstar” repeatedly urged her fellow Americans to embrace the ideals proposed by the nation’s Founders, calling them America’s “mission statement.”

And what is the mission statement of the Williamson candidacy?

“Our mission statement does not change over time. Thomas Jefferson and Abraham Lincoln already wrote them,” Williamson said. It’s ‘all men are created equal. God gave all men inalienable rights of life, liberty, the pursuit of happiness. That ours is to be a government of the people, by the people and for the people.’

Williamson’s comments would have inspired cheers at a Tea Party rally during the Obama years, and they’re not necessarily what one expects to hear from the author of “A Return to Love: Reflections on the Principles of A Course in Miracles.”

Listen to our podcast conversation with Marianne Williamson here!

Williamson’s candidacy offers an unusual blend of constitutional fundamentalism and political progressivism. At a time when many of her fellow Democrats are dismissing the Constitution as a fundamentally flawed document or calling for major changes in it like eliminating the Electoral College or repealing the Second Amendment, Williamson says its principles are needed to bind together a diverse nation.

“I do not believe that most Americans are racist, that is not my experience. We are a good people,” Williamson told NHJournal.

At the same time, she believes there are “defects in the American character,” and she points to the politics of President Trump.

“The last presidential election was a perfect storm,” Williamson said. “I think Trump has harnessed some of the worst, most base instincts of Americans.  But on the other hand, I think some very good people voted for him as well. So I believe that there lies within all of us demons and angels as it were. Politically speaking, of course.”

Williamson would like to confront some of those demons with perhaps the most progressive policy positions in the 2020 field.

She supports a Green New Deal that bans fracking, ends coal production and calls for an end to corporate agriculture, among other things. On guns, she wants to ban the sale of so-called “assault rifles” and supports gun licenses “along the same lines as licenses to drive a car.” And when NHJournal asked her what one bill she would most like to sign into law on her first day as president, Williamson said “Public funding for federal campaigns. Absolutely.”

“Until we override Citizen’s United, we will continue to experience ourselves functioning more like a veiled aristocracy than like an actual democracy,” Williamson said.

(Citizen’s United is the 2009 Supreme Court ruling that held “political spending is a form of protected speech under the First Amendment, and the government may not keep corporations or unions from spending money to support or denounce individual candidates in elections.”)

But perhaps Williamson’s most progressive position is her call for up to $500 billion in cash payments for slavery reparations, which she says “is not some black agenda. It’s an American agenda.”

“My campaign is based on the idea of moral and spiritual regeneration,” Williamson told NHJournal. “Lincoln said a nation must confess its sins. A nation, like a person, must take a serious moral inventory. We simply can’t have the future we want if we don’t clean up the past.”

According to a statement from her campaign, “Marianne supports reparations in the form of establishing a commission or council which would direct investment in economic and educational revitalization and renewal, not cash payments.”

Williamson has been campaigning extensively in New Hampshire, and her Granite State political Sherpa is former Rep. Paul Hodes, who says Marianne is resonating in New Hampshire “because she’s authentic, passionate, inspiring and down to earth. She is making deep personal connections with voters here.

“I’ve followed Marianne Williamson’s work for many years. In fact, one of her well-known quotes inspired me to run for Congress. Having served as a United States Congressman, I know, in depth, how much transformation and change we need. I’m excited to be working with a candidate who embodies the higher ground of the common good.”

The major political concern of the Williamson campaign was getting on the platform for the first DNC debates in Miami on June 26-27.  The DNC set two criteria for candidates to qualify: Receiving more than 65,000 unique donations, including more than 200 in at least 20 states; or polling at 1 percent or higher in three different DNC-approved polls. Williamson broke through the donations barrier earlier in May, but with the DNC limiting participation to 20 of the 24 candidates, Williamson needed to meet both criteria to assure a spot on the Miami stage.

Williamson passed the polling threshold in the new Monmouth poll released on Thursday.