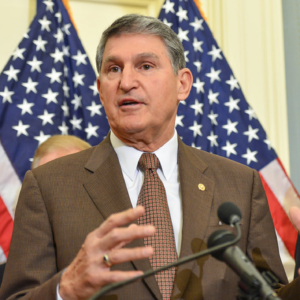 Did Sen. Joe Manchin do his fellow Democrats a favor by killing the multi-trillion-dollar Build Back Better spending plan, as Republicans suggest?

New Hampshire Democrats had little to say on the record about Manchin’s bombshell, announcing on Fox News Sunday he is a “no” vote on his party’s top agenda item. But off the record, many share the view of the White House and D.C. Democrats: Failing to pass something is a major problem for their party.

Manchin made his announcement on Fox News Sunday, explaining that concerns about inflation, COVID, and the debt were keeping him from backing the bill. In a statement he released soon after, Manchin also mentioned the vast scope of the bill.

“My Democratic colleagues in Washington are determined to dramatically reshape our society in a way that leaves our country even more vulnerable to the threats we face. I cannot take that risk,” Manchin said.

“The stunning decision by Sen. Joe Manchin on Sunday to announce his opposition to Biden’s Build Back Better legislation handed the president a stinging defeat,” reported Politico’s Jonathan Lemire.

“Manchin’s declaration was a stunning repudiation of Biden’s and his party’s top goal,” wrote the AP’s Hope Yen. “A rejection of the legislation has been seen by many as unthinkable because of the political damage it could inflict on Democrats.”

And the headline at Rolling Stone magazine was even more brutal: “Joe Manchin Just Tore Out the Heart of Biden’s Agenda.”

The data show Biden’s agenda was already hurting — if not actually heartless — before Manchin’s announcement. A recent NHJournal poll found Build Back Better was already underwater 45-52 percent, a number in line with national polling. Individual elements, like the state and local tax (SALT) deduction and benefits for illegal immigrants included in the House version of the bill also poll poorly, according to pollster Scott Rasmussen.

So is it good news for Democrats in competitive 2022 races that they won’t have to vote on this bill? Senators like Maggie Hassan of New Hampshire and Mark Kelly of Arizona?

“There are no good options for Democrats like Hassan and Kelly,” Rasmussen told NHJournal. “The Build Back Better plan was sold to progressives as inevitable but included so many unpopular provisions that it was unsupportable.”

Democrats don’t appear to agree. They are apoplectic over Manchin’s move, with the White House taking the unusual move of attacking the West Virginia senator — despite the fact they can’t pass anything in the U.S. Senate on a partisan vote without his help.

“If his comments on FOX and written statement indicate an end to that effort, they represent a sudden and inexplicable reversal in his position, and a breach of his commitments to the president and the senator’s colleagues in the House and Senate,” White House spokesperson Jen Psaki said. “Just as Sen. Manchin reversed his position on Build Back Better this morning, we will continue to press him to see if he will reverse his position yet again, to honor his prior commitments and be true to his word.”

Calling Manchin a liar is an unusual strategy for working with a vital ally, to say the least. Politico reports at least one senior Democratic aide texted them after the Psaki statement was released: “Whoever at the White House who thinks it’s a good idea to go scorched earth needs to be fired.”

Vermont Socialist Sen. Bernie Sanders was even angrier, appearing on CNN to call Manchin out.

“I think he’s going to have a lot of explaining to do to the people of West Virginia to tell them why he doesn’t have the guts to take on the drug companies to lower the cost of prescription drugs, why he is not prepared to expand home health care,” Sanders said.

Still, New Hampshire Democrats told NHJournal on background, they believe Democrats will pass something next year, however modest. “Have you ever been to a sausage factory? Not all the sausages come out the same size,” one Democrat said.

Another argued that despite the personal attacks on Manchin, a political deal would be reached to pass something to appease the Democratic base before the 2022 elections because “Well, they have to. They just have to.”

“There’s so much at stake — for our state, our country, and our future — which is why this legislation is so critical. We cannot allow political posturing to get in the way of progress,” Rep. Annie Kuster said in a statement Sunday. “Granite State students, parents, seniors, veterans, and health care workers are counting on us. I will continue working to deliver this package for the people of New Hampshire.”

The rest of the New Hampshire delegation was silent.

Rep. Ilhan Omar (D-Minn.), a close ally of Kuster’s, spoke for many of her party’s progressives when she told CNN: “We all knew that Senator Manchin couldn’t be trusted. The excuses he just made, I think, are complete bullsh*t.”

According to media reports, there’s quite a bit of profanity coming from moderate Democrats directed, not as Manchin, but at Speaker Pelosi. Her decision to push the full $5 trillion, progressive-politics version of Build Back Better through the House now looks like a mistake.

As the Wall Street Journal editorialized:

Speaker Nancy Pelosi had her Members vote to pass tax increases and $5 trillion in spending that will not become law. She had promised her swing-district Members she wouldn’t do that as she did when they voted for a climate bill that failed in 2010. Then she did it anyway.

Reps. Josh Gothheimer (New Jersey), Henry Cuellar (Texas) and many others will now have to defend a bill that Republicans can accurately say was too radical to pass. This is Mrs. Pelosi’s fault, not that of Mr. Manchin, who was honest about his objections from the start.

The consensus among Democrats is passing more legislation is their best strategy in the face of what is shaping up to be a red wave next year.

“If we could get the Build Back Better plan passed and get a strong voting rights bill passed, Democrats will have a strong possibility of at least keeping the Senate,” Hendrell Remus, chair of the Tennessee Democratic Party said during a strategy session in Charleston, S.C. this weekend.

According to Rasmussen, the reality is even tougher.

“The voters who are most enthusiastic at this moment are those who prefer Trump-like policies. The only bad news in polling for Republicans at the moment is that the election is not being held today.”