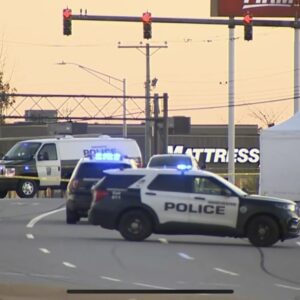 Granite Staters were shocked by the news of a bloody murder in broad daylight Saturday on South Willow Street just yards from the Mall of Manchester. Police arrested Tyrese Harris, 22, of Manchester. He had previous encounters with law enforcement, according to reports. Harris faces second-degree murder charges for allegedly shooting 45-year-old Dzemal Cardakovic in the head in what may have been a road rage incident.

The murder is a devastating moment for the victim’s family but is also becoming an issue in state politics, where the crime problem is cutting against Granite State Democrats in the swiftly approaching midterm elections.

Crime is rarely mentioned in the political ads flooding TV screens and social media, but pollsters and GOP pundits say it may have a more powerful impact on next week’s vote than any issue other than inflation.

In Democratic strongholds like New York and Oregon, Republican candidates are surprisingly competitive. There are realistic chances of GOP congressional wins even in deep-blue New England districts in Connecticut and Rhode Island.

How are they doing it? Not inflation or gas prices. It’s crime.

“Crime, in many ways, is the thread that is holding those together,” said former Democratic Congressional Campaign Committee head Dan Sena.

“The issue is crime and the economy—not abortion. It always was,” said veteran New York strategist Hank Sheinkopf. He told the Financial Times that, as a political issue. abortion can’t compete with “fears about getting shot walking down the street or putting food on the table.”

New Hampshire is currently experiencing a surge in crime news, from the high-profile Harmony Montgomery case to the shooting of Stephen and Djeswende Reid in Concord, to the stabbing death of Daniel Whitmore in Manchester, allegedly by a man who had been released on PR bail twice.

“This shooting marks the second murder in my district in two months, Berry said. “Unfortunately, crime is not a new concern for the people of the Southside of Manchester. When I speak with my voters, crime is their top concern, and they are voting based on who supports the reforms necessary to help keep them and their families safe.

“Whether it is a broken cashless bail system or failed mental health programs, my constituents have borne the brunt of these failed policies that have directly led to them being less safe. The time for change is now,” Berry added.

And so, Republicans are doubling down on their crime messaging, while Democrats are largely keeping the focus on abortion and the election denier/January 6 issue. 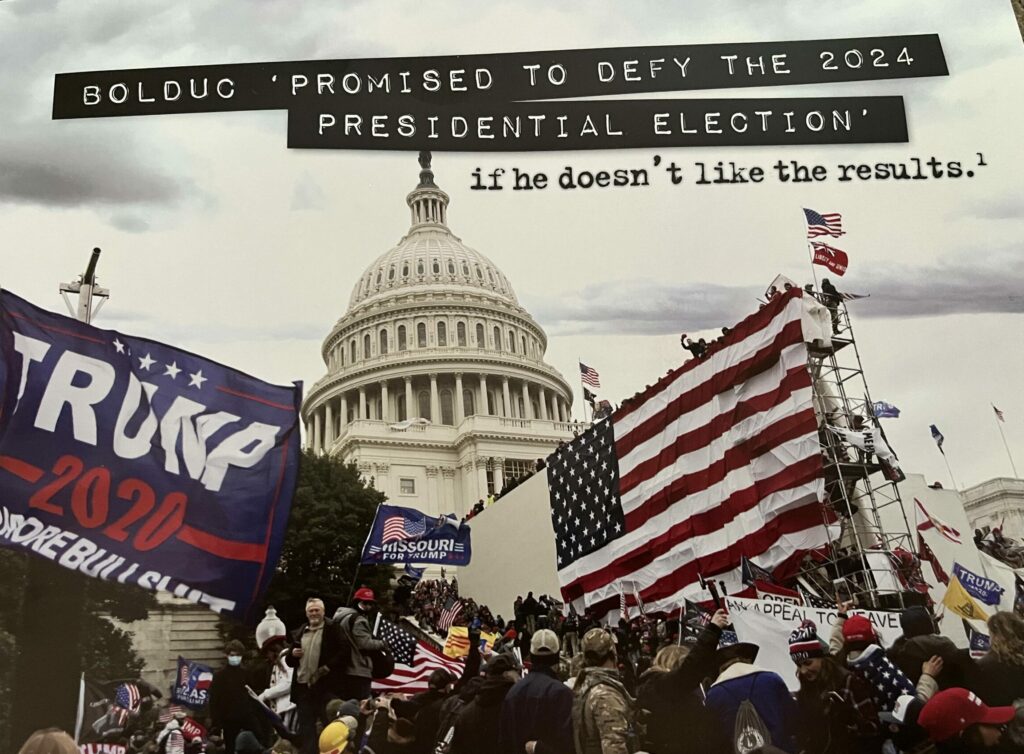 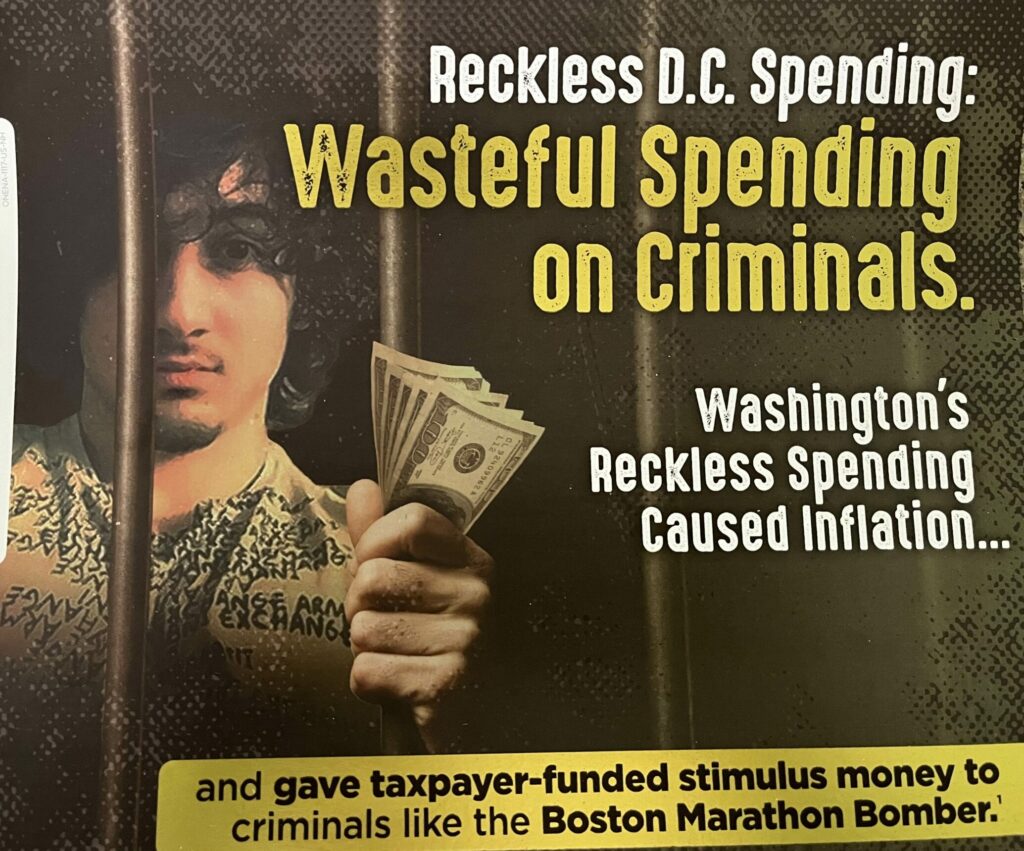 It is true Hassan provided the 50th vote to kill a GOP amendment stopping those checks. But the visual is heavy on crime and light on spending. The flyer is one of about a dozen similar mailers with the same anti-spending text but strong anti-crime visuals.

“Fear is one of the most powerful forces in politics. It’s much easier to influence voter behavior through fear than any other means,” Lesperance said. “Add in a media obsession with focusing on sensational stories focused on crime and you have an electorate looking for candidates who make them feel safe.

“Ironically, despite New Hampshire being a safe place to live the sensational and nationalized news is having an impact on voters and, no doubt, will impact the midterms.”

“This is the ‘Maslow’s Hierarchy of Needs’ issues matrix of this election,” says veteran GOP strategist Patrick Griffin. “Voters have deduced, ‘If I can’t be safe, nothing else really matters.’ Democrats are facing a Red Wave because their policies on crime have Americans unable to sleep at night. It’s one of the single biggest drivers in this election.”

Polls appear to back him up.

A recent Gallup poll found concern about crime among independents is the highest they’ve been since 2009. And a CBS News poll released Sunday found that 79 percent of Americans said they feel like things in the country are “out of control,” while just 21 percent said they are “under control.”

The same poll found voters said Republicans made them feel safer than Democrats by a 16-point margin. It was one of three recent polls giving the GOP a double-digit advantage on the crime issue.

And there are public policy differences for the two parties to debate as well. For example, U.S. Reps. Chris Pappas and Annie Kuster both voted for the George Floyd Justice in Policing Act which would have stripped police officers of their qualified immunity protections.

The measure also declared that police stops and arrests of members of racial and ethnic groups at higher rates than their population were “prima facie evidence of a violation” of the law. In New Hampshire, where minority communities are small, the rate of crime committed by Black and Hispanic people — mostly males under 30 — is always higher than their percentage of the overall population. Under the Pappas/Kuster-backed bill, cops would have to find reasons to stop or arrest more White people, or lower the number of crimes they investigate that were committed by members of minority communities.

Just last month, Pappas and Kuster voted for the Mental Health Justice Act. It would fund local programs to send mental health workers instead of cops to some police calls.

Republican critics say the bill, which hasn’t been voted on by the Senate, would send mental health providers into potential crime scenes and volatile situations.

“A crime scene or a home experiencing a domestic violence dispute is not the setting to provide mental health care,” said Rep. Kelly Armstrong (R-N.D.) during the House debate. “Nobody can confidently tell us they know in advance which domestic violence calls should get a mental health response instead of a law enforcement response.”

Hassan, Kuster, and Pappas all declined to comment for this report.