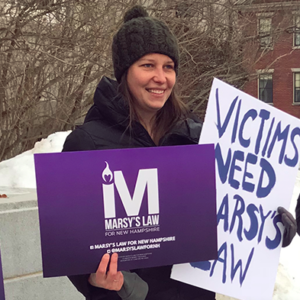 Marsy’s Law has made many strange bedfellows across New Hampshire. It has the support of the Republican governor, Chris Sununu;  GOP Attorney General Gordon MacDonald; GOP Senate President Chuck Morse; plus every Democrat in the Senate. Republican senator William Gannon and Democrat Martha Fuller Clark are both scheduled to speak on behalf of this proposed constitutional amendment that would enshrine the rights of crime victims in the state’s highest law.

At the same time, some of New Hampshire’s conservative grassroots activists find themselves in rare agreement with the traditionally liberal ACLU in opposing Marsy’s Law.  The ACLU worries about what will happen if the constitutionally-protected rights of alleged criminals and the new rights of victims come into conflict. Meanwhile, some traditional “Constitutionalists” want to protect the constitution as a document that protects existing—or “natural”—rights, not a device for inventing new ones.

In the end, the fate of Marsy’s Law is likely to come down to a simple political question: Who benefits? And there is virtual agreement, even among its opponents, that passing Marsy’s Law in New Hampshire would be a win for crime victims and their families. That is a strong selling point.

Now Guida complains about  “an emotional rush that leverages the horrific circumstances facing many victims, into inadequately crafted changes to the fundamental principles of our self-governance.”

The New Hampshire ACLU opposes Marsy’s Law because they claim it could put the rights of defendants at risk.  What happens, for example, if a defendant needs an alleged victim to testify but the victim—who is also by definition a witness—refuses under Marsy’s Law and the right “to refuse an unnecessary interview or deposition request made by the accused?”

But even the ACLU acknowledges that federal constitutional protections of defendant’s rights would supersede any actions by New Hampshire and so, in that case, the defendant is likely to prevail. All Marsy’s Law does—for those crime victims who choose to opt-in—is ensure that as a judge is balancing those competing interests, the rights of the victims are on a level playing field.

As former US federal judge Paul Cassell says in a video promoting Marsy’s Law, “This is not some technical issue that requires experts.  It just requires a sense of justice.”

Opponents like Hooksett attorney Nicole Fortune, complain that the law is  “a solution in search of a problem.” Sen. Guida notes a 2015 Department of Corrections study that found more than 80 percent of New Hampshire crime victims gave the state’s victim’s advocacy system a thumbs up. “Do we really have a problem,” Guida asks?

But the math of Marsy’s Law turns that question on its head.  If the rights of the accused are protected and if the victim’s advocacy system works fairly well, then Marsy’s Law is essentially a backstop.  The law would only be invoked in those extreme, often heart-rending cases, that involve victims of rape, sexual assault or abuse—victims who could be re-victimized again without the protections of Marsy’s Law.

As Strafford County Attorney Tom Velardi said in his testimony before the state Senate: “There is nothing subtracting away from our long-held constitutional rights [for the accused]. What we are talking about is an elevation of victims’ rights.”

Sen. Carson agrees: “We just want to make sure that the victim is heard throughout this process. That’s really the heart of Marsy’s law.