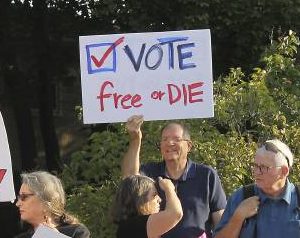 First in the nation, but thirteenth in political engagement? What’s up with that?

That’s what New Hampshire politicos are asking after a new WalletHub analysis ranked New Hampshire number 13 when it comes to civic participation, a rating local activists dismissed as off the mark. Particularly galling was the Granite State’s ranking behind Massachusetts, which came in at number 10.

Mayberry grew up in Gorham, Maine, where he became politically active and started supporting candidates at 14.

“It was a passive event that happened every four years,” Mayberry said. “When I came to New Hampshire, it was a one-on-one contact sport every two years, and then in the off years, you have municipal elections.”

Mayberry said with the “First in the Nation” primary and the number of people it draws out to campaign events, as well as the fact that there is one representative to every 3,000 people in the state’s House of Representatives, New Hampshire should easily be ranked number one for political engagement.

Maine came in first in the top three categories.

“New Hampshire has an outstanding and consistent track record when it comes to voter turnout, especially in presidential election years,” said veteran Democratic strategist Jim Demers. “And we also have very strong voter participation in candidate forums and town halls which is probably the result of the presidential primary and the concept of annual town meetings.”

The one area where Massachusetts truly outperformed New Hampshire was in highest political donations, where the Bay State tied for first with Virginia.

“When it comes to campaign contributions, it’s a challenge partly because we have so many candidates that run for the largest legislature in the entire country,” Demers said.

“One thing New Hampshire does really well is vote, and we vote in really large numbers,” Rath said. “I think we will be one of the top five or six states in the country because we love to vote, and we vote all the time.”

A record 452,088 Granite Staters voted in the February presidential primary, including more than 150,000 who voted in the GOP primary to re-nominate President Trump over nominal opposition.

Rath said some people who do not agree with either the Republicans or Democrats may have become disenfranchised with politics, especially in recent years when things on the national level seem so divisive, but he has advice for the younger and older generations.

To the young, Rath says, “Be not afraid. The only way to stop this and to come through this is for people of good nature to say, ‘I’m not going to leave this to somebody else.’”

To those who are tired of the current state of affairs and would rather go golfing, Rath says at 75 years old, he gets it. But he wants his grandchildren to know his generation has not given up.

“The worst thing to do is to walk away from the table,” Rath gave as advice for his peers. “This doesn’t belong to the people who yell. This belongs to us.”

A record 137.5 million Americans voted in the 2016 presidential election, according to data from the U.S. Census Bureau. Two years later, American voters set another record when more than 118 million people turned out, the highest turnout in a midterm election in a century.