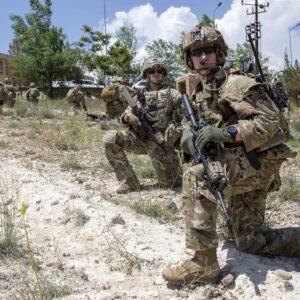 Advisors from the 2nd Security Force Assistance Brigade conducting advising during their 2019 deployment to Afghanistan. (CREDIT: U.S. Army)
[IS] Opinions

As the Afghanistan War finally comes to its end many Americans are looking back over the past 20 years and asking questions that are tough and deserve to be addressed.

The consensus is most Americans wanted out of Afghanistan (although there is a case for leaving a skeleton force behind for anti-terror efforts). But I doubt many Americans wanted to leave in this fashion. Our TV and phone screens were inundated with video of desperate Afghans running to American planes clamoring to escape the coming persecution. Perhaps the most jarring image was of the man who was so driven to flee the Taliban that he latched onto a military plane’s exterior and fell off in mid-air. The calamity of the exit is inexcusable.

Predictably, the politicians and politicos began fingerprinting. But if we are being honest, everyone in power over the last two decades owns a piece of this failure. From both parties to our senators, congressmen, presidents, and our military leaders. We lost in Afghanistan, not because of our brave soldiers on the ground, but because we lost track of the mission. They were there to fight terror, not nation-build.

At this problem’s core, there was a neo-liberal arrogance that we thought we could impose our western ideals onto a society that was not ready and possibly not capable of accepting our western vision of a free democracy. Make no mistake, I believe we are morally just to try and expand the ideals of freedom and liberty. However, the other side must want it as well and in Afghanistan, that clearly was not the case.

This leaves us with the problem we now have there. Afghans have been exposed to our ideals and some have fallen in love with them. There are those who liked that millions of girls were being educated for the first time and that women, at long last, were able to open and run businesses. There were true believers who wanted democracy to flourish in their homeland. While this is in itself is noble, it was not our mission. Our mission was–and should have remained–the War on Terror. Not nation-building,

While we as a nation hopefully have learned that our hubris has had tragic consequences and not to pursue this course again, we have created a very perilous situation going forward. All those in Afghanistan who supported us, who fought alongside our soldiers, are now in grave danger. These desperate people have been abandoned.

Moreover, American credibility has been badly damaged. What signal does all of this send to our allies around the world?  Especially the Taiwanese, who are facing the threat from Communist China. In fact, the Chinese are already using our disastrous withdrawal as propaganda, saying to the Taiwanese, how can you trust the Americans?

While Afghanistan will leave a mark on American history, we must now be concerned with the message it sends to other freedom-loving people throughout the world who now fear that our country, the last bastion of freedom, may not follow through on its commitments and cannot be a trusted ally and friend.  As we go forward, while continuing to fight the War on Terror aggressively and with American interests first, let’s resolve to carefully define our mission. Our vital interest is in American national security, not nation-building. Let’s focus on keeping Americans and our wonderful nation safe and secure.