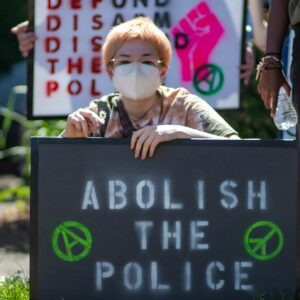 At a vigil Saturday night in response to the police shooting death of 20-year-old Daunte Wright, a local Black Lives Matter leader called for the abolition of police. It’s a position that’s been embraced by national progressive activists as well.

According to a news report from NHPR, Black Lives Matter Nashua founder Jordan Thompson told the 100 or so people gathered on Saturday that police reform isn’t possible. “We try to work with elected officials; we try to work with local police to bridge gaps, to find common ground, to do reform work. But the system can’t be reformed, and we’re not here asking to reform. We’re here asking for abolition.”

Two days earlier, the BLM Nashua Twitter account delivered the same message: “This system cannot be reformed. Abolition is the only way forward.”

Police abolition, sometimes referred to by the shorthand “defund the police,” has become a serious policy proposal advanced by progressive activists. On Monday, Reps. Ilhan Omar (D-Minn.), Rashida Tlaib (D-Mich.) and Ayanna Pressley (D-Mass.) reacted to the killing of Wright by calling for the “abolition” of policing.

“It wasn’t an accident. Policing in our country is inherently & intentionally racist. Daunte Wright was met with aggression & violence,” Tlaib tweeted. “I am done with those who condone government-funded murder. No more policing, incarceration, and militarization. It can’t be reformed.”

Pressley tweeted, “From slave patrols to traffic stops. We can’t reform this.”

The same message was heard in San Francisco during another protest of Daunte Wright’s death. “Police will never be held accountable because the system doesn’t want them to be,” said Aditi Joshi of Defund SFPD Now. “They will always kill because the system of policing is NOT broken. It is functioning as intended. The time for waiting is long over. We must defund, disband, and abolish the police.”

Some progressives insist the “abolish” and “defend” rhetoric is simply that — rhetoric– and isn’t a serious political position. President Joe Biden and Speaker of the House Nancy Pelosi have both distanced themselves from the “defund the police” discussion. “That’s not the president’s view,” White House press secretary Jen Psaki said last week when asked about Tlaib’s comments. “The President’s view is that there are necessary, outdated reforms that should be put in place; that there is accountability that needs to happen; that the loss of life is far too high; that these families are suffering around the country; and that the Black community is exhausted from the ongoing threats they feel.”

However, activists who support the idea insist they are very serious, and they are demanding that their political allies take up the call. As Mariame Kaba, an anti-incarceration activist, wrote in the New York Times last year, “Yes, We Mean Literally Abolish the Police.”

It’s an idea that appears to have little public support. An Ipsos/USA Today poll released last month found fewer than one in five Americans support the #DefundThePolice movement. Not only is the idea wildly unpopular among White Americans and Republicans, just 28 percent of Black Americans and 34 percent of Democrats support it.

In New Hampshire, few politicians have shown any willingness to embrace significant police reform, much less endorse massive reductions to police budgets or eliminating policing altogether. Even a modest proposal like lifting qualified immunity protections from the police was defeated in the New Hampshire House 184-178 during the most recent session.

NHJournal was unable to reach Jordan Thompson or BLM Nashua for this article.

But if their ideas sound extreme or part of the political fringe, the national ACLU also tweeted out in response to the shooting death of Adam Toledo:

“A system that kills children with impunity — again and again — cannot be reformed.”