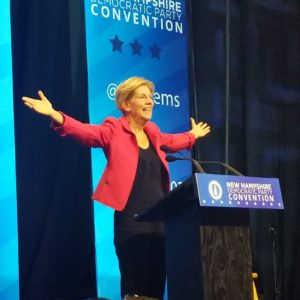 Senator Elizabeth Warren received a rock-star reception from New Hampshire Democrats at their state convention in Manchester on Saturday, and she used the opportunity to take a direct shot at Joe Biden and the premise of his campaign.

Granite State Democrats gave a friendly welcome to all 19 of the 2020 presidential candidates who participated in Saturday’s cattle call, but the two-minute roar of approval that greeted the Massachusetts senator was unmatched by her competitors — in particular, former Vice President Joe Biden.  The greeting even appeared to take Warren by surprise, who finally had to wave the crowd down into their seats.

“Thank you, this means the world to me,” she told the crowd.

While the welcome she received stood out, Warren’s speech was fairly pedestrian. She largely stuck to her stump-speech script, re-telling the now-familiar story of how she attended a commuter college (“it cost $50 a semester”) to fulfill her dream of becoming a school teacher. She reiterated her class-warfare rhetoric about wealthy Americans using their power to corrupt the nation’s politics and abuse average Americans, and she laid out yet again her proposal for an annual wealth tax on assets above $50 million.  It was familiar territory for party activists who attend events like state party conventions.

She broke from the familiar only once, when she challenged the premise of the Biden campaign and his current frontrunner status. “I get it, there is a lot at stake [in this election] and people are scared,” Warren told her fellow Democrats. “But we cannot choose a candidate we do not believe in because we are scared.

“And we cannot ask other people to vote for someone we do not believe in.”

It was a message echoed by several of her fellow Democrats from the convention stage.

“We cannot make the mistake that says ‘we have to play it safe. This election is just about finding someone that can beat Donald Trump,” Sen. Cory Booker (D-N.J.) said in his speech. “We have to beat Donald Trump, but beating Donald Trump is the floor, it’s not the ceiling.”

South Bend, Ind. Mayor Pete Buttigieg made a similar point talking to reporters after his convention appearance. “Every time we’ve tried to play it safe with established and Washington-tenured figures, every single time we’ve come up short.”

And coming from Liz Warren, it was a message many in New Hampshire were ready to hear.

“I’m leaning toward Elizabeth Warren,” said Karen Steele of Plaistow, N.H.  “Back in 2004 she gave a speech about the coming collapse of the middle class. I watched the video of that speech several times and I told my husband, ‘she needs to be our president.’ Liz is primed and ready.  I love Mayor Pete, but I think Warren has the experience.”

Anisha Rao is a Wellesley College student from Lufkin, Texas who supported Beto O’Rourke’s bid for U.S. Senate and jumped at the chance to take a photo with him at Saturday’s event. But she and two of her Wellesley classmates said they were leaning Warren in the primary. “I like Beto, but there’s a lot of support for Senator Warren on campus, definitely,” Rao said. “Students really like her plans to forgive student loan debt.”

Interestingly, Warren is one of the candidates who is underperforming in New Hampshire compared to her polling nationwide.  That’s a counter-intuitive outcome given she’s from a border state and has campaigned extensively in the Granite State.

However, she’s invested heavily in staff and organization for the first-in-the-nation primary, and that work was in evidence at the convention when her campaign was able to organize her supporters in the hall and pump up her raucous reception with thundersticks.

If Warren goes on to win the New Hampshire primary on February 11th, this may be the day political pros point to as her campaign’s turning point.