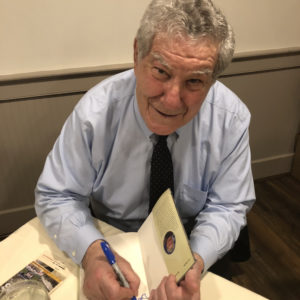 At a signing event for his new book, Lion of the New Hampshire Senate and Thoughts for Presidential Hopefuls, NHJournal asked longtime Granite State political player Sen. Lou D’Allesandro (D-Manchester) for his (very) early take on the 2020 Democratic presidential primary.  One name kept coming up:

The 40-year veteran of New Hampshire politics also mentioned former Vice President Joe Biden and Sen. Bernie Sanders as candidates who would “probably play well in New Hampshire” in 2020, but he repeatedly singled out Rep. Ryan as someone to watch.

Ryan is best known as the moderate Democrat who launched an unsuccessful challenge to Nancy Pelosi to lead Democrats in the House.  And it’s no secret that the Ohio congressman has a possible presidential run on his mind.  Ryan has been traveling the country for Democrats, including a stop in South Carolina last month at Rep. Jim Clyburn’s (D-SC) annual “World Famous Fish Fry.”

“Rep. Tim Ryan for president in 2020? Think about it. (He sure is)” was a recent headline in Crain’s Business Cleveland.

Ryan, who received his law degree from the University of New Hampshire in 2000, will be back in New Hampshire this week, speaking at the UNH law school graduation this Saturday.

“We are thrilled to welcome an alum of Tim’s stature back to campus to help us celebrate the next class of law school graduates,” said UNH Law Dean Megan Carpenter.

And perhaps picking up a copy of Sen. D’Allesdandro’s new book for presidential hopefuls.