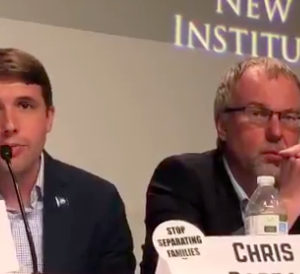 At a candidates forum hosted by the progressive group Rights And Democracy (RAD-NH), Levi Sanders called out his fellow Democrat Chris Pappas for refusing to support single-payer health care–and then mocked Pappas’s attempt at a rebuttal.

The forum, which featured nearly all of the 11 Democrats running to replace outgoing First Congressional District Congresswoman Carol Shea-Porter, began with a fiery speech by Nina Turner, the controversial president of Bernie Sanders’ political organization “Our Revolution.”  (Neither Turner nor Sen. Sanders have endorsed Levi in the NH-01 race).

During the forum, candidates were asked their positions on several issues, including immigration and health care (a Facebook video of the event can be viewed here.)  After Pappas, widely viewed as one of the front-runners in the race, gave his answer, Sanders immediately pounced:

“What you just heard is that Chris Pappas doesn’t believe in a ‘Medicare For All’ single-payer healthcare system,” Sanders said. “So I want to ask Chris and all the other people who don’t believe in it:  How do you plan to deal with the issues of co-payments, deductibles and premiums?”

“I talk to people all over the district and they tell me they have stomach aches and anxiety disorders from worrying about what’s happening with their healthcare,” Sanders said. “We need a health care system that is free for every man, woman and child. That means no co-payments, no deductibles and no premiums.”

As Pappas offered a 30-second rebuttal, Sanders waved his arms mockingly to the crowd, implying that Pappas’ answer was confirming Sanders’ claim.

Pappas did say he supports the Medicare Choice Act at that would allow individuals and businesses to buy into the Medicare system, and an so-called “public option” as part of Obamacare. However, he has thus far declined to support a single-payer healthcare proposal. Pappas has also refused to back the #AbolishICE movement embraced by many of his opponents in the NH-01 race.  Political observers see this as part of Pappas’ “general-election” approach to the race, presenting himself as the more moderate Democrat most likely to hold the seat for his party in the November midterms.  In 2016, Donald Trump narrowly carried NH-01 against Hillary Clinton.

Will New Hampshire Democrats think strategically in the September primary? Or do the angry activists of the party’s progressive base–the people who helped elect candidates like Alexandria Ocasio-Cortez in New York City–want someone who’s up for a fight?